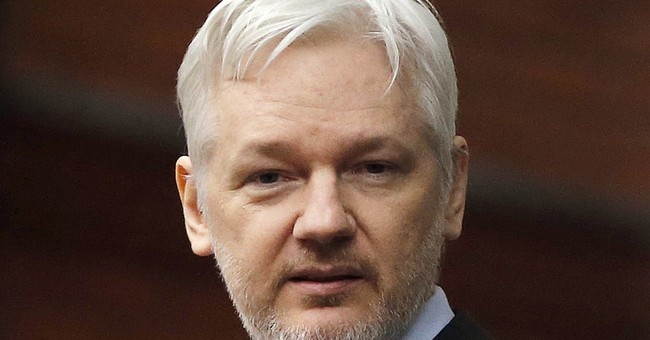 UPDATE: Some outlets are reporting it's not going to happen. The latest WikiLeaks announcement did note, however, that a press conference will be held Tuesday morning at which time they'll discuss the state of their investigations.

WikiLeaks press conference Tuesday 10:00 am Berlin time on the past, present & future of WikiLeaks #wikileaks10 https://t.co/VCtBLFmNWD

Julian Assange will still give his highly anticipated announcement on Tuesday, according to NBC reporter Jesse Rodriguez. It was initially planned to come from the balcony of London’s Ecuadorian Embassy, but was cancelled due to “security concerns.”

Rodriguez says the announcement will now be made over a video link at a Berlin press conference.

According to @wikileaks, Julian Assange will appear via video link at Berlin press conference on Tuesday AM

The announcement is thought to be a document dump about Hillary Clinton. Assange appeared on Fox News in September claiming WikiLeaks has damaging documents about the Democratic nominee, and that it would soon be releasing “teasers” that promised to significantly impact the election.  Nothing has been released since that interview, however.

WikiLeaks published nearly 20,000 emails over the summer showing that top officials at the DNC were far from neutral during the primary contest and even floated plans to undermine Sen. Bernie Sanders’ campaign.

Trump supporter Roger Stone said on Sunday that the announcement would be the end of Clinton’s campaign.