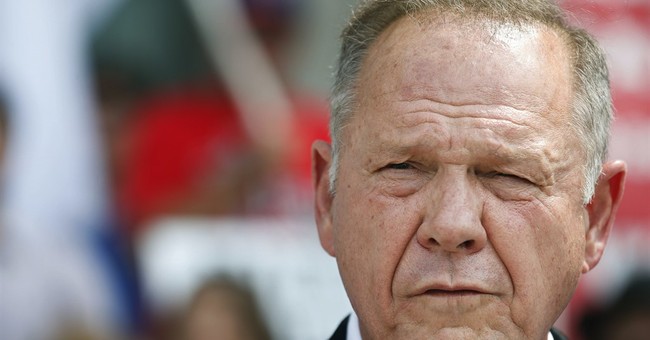 The Alabama Court of the Judiciary determined on Friday that Chief Justice Roy Moore violated standards of judicial ethics for defying federal gay marriage rulings. As punishment, Moore has been suspended for the rest of his term, which is set to end in 2019.

"At the outset, this court emphasizes that this case is concerned only with alleged violations of the Canons of Judicial Ethics," the COJ states. "This case is not about whether same-sex marriage should be permitted: indeed, we recognize that a majority of voters in Alabama adopted a constitutional amendment in 2006 banning same-sex marriage, as did a majority of states over the last 15 years."

Prosecutors said Moore's order sought to have probate judges defy the U.S. Supreme Court's ruling that declared gay marriage legal nationwide and halt the issuance of marriage licenses to same-sex couples. Moore testified that it was only a "status report" to probate judges.

In its 50-page order on Friday, the COJ stated it did not find credible Moore's claim that the purpose for the Jan. 6 order was "merely to provide a 'status update' to the state's probate judges."

"We likewise do not accept Chief Justice Moore's repeated argument that the disclaimer in paragraph 10 of the January 6, 2016, order – in which Chief Justice Moore asserted he was 'not at liberty to provide any guidance ... of the effect of Obergefell on the existing orders of the Alabama Supreme Court' – negated the reality that Chief Justice More was in fact 'ordering and directing' the probate judges to comply with the API orders regardless of Obergefell or the injunction in Strawser (federal case in Alabama)."

Moore's attorney, Mat Staver, stated in a press release that the COJ couldn't agree on an outright removal of Moore from the bench so it decided to suspend him for the rest of his term.

"To suspend Chief Justice Moore for the rest of his term is the same as removal. The COJ lacked the unanimous votes to remove the Chief, so the majority instead chose to ignore the law and the rules," said Mat Staver, Founder and Chairman of Liberty Counsel.

This isn’t the first time Moore has been found guilty of defying federal courts. In 2003, he was removed from his chief justice job for refusing to move a 10 Commandments monument from the state judicial building. But voters didn’t seem to mind, as he was re-elected to the job in 2012. This time, however, Moore, 69, won’t be able to run for the office again because of his age.

According to Staver, Moore is filing an appeal to the Alabama Supreme Court.