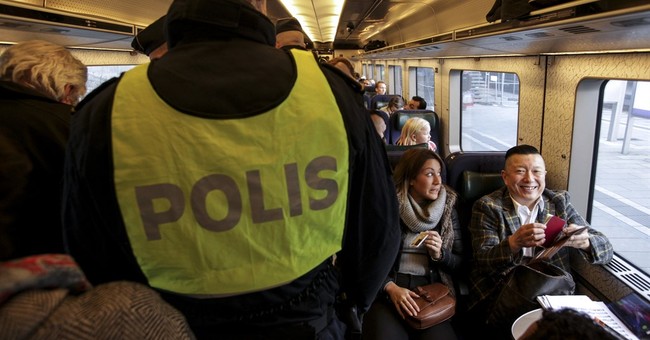 As part of its plan to combat migrant sex crimes, the Swedish police are gearing up to hand out wristbands to young women that read, “don’t touch me.” They will be passed out over the summer at events and festivals.

“By wearing these wristbands,” Sweden’s police chief said, “young women will be able to make a stand.”

The wristbands are written in Swedish, however, while the vast majority of those perpetrating the sexual assaults are thought to be migrants, who are unable to read Swedish.

A Swedish police report released last month noted that the country had the worst rates of sexual violence against women in Europe. The report acknowledged migrants were responsible for the bulk of the problem but the police were accused of making excuses for the perpetrators.

Although sexual harassment and assault are commonplace in many Muslim countries, the reportblamed“Nordic alcohol culture” and “masculinity” for the wave of assaults that have terrorised Swedish women.

Migrant sex gangs are alleged to have been roaming the Sthlm music festival for 12 to 17-year-olds for the past two summers. One leaked police memo indicated that “unaccompanied youth” migrants, from the Middle East, were responsible for most of the attacks.

Sexual assaults were reported at Swedish music festivals Arvika in 2006 and 2010, Emmaboda in 2014 and Bråvalla in 2015. Police were accused of covering up the attacks.

The country’s national police chief said the bracelets will help women “draw attention to the issue [of sexual assault], and urge those affected to report.”

This sounds like about as good of an idea as gun-free zone signs.

Liberal Twitter Up in Arms As Bill Maher Trends Again For Mercilessly Mocking the Woke Left
Townhall
Now the 'I work on the COVID floor at my hospital' variant is spreading on Twitter thanks to a veterinarian
Twitchy
'Science' Burns Its Credibility to the Ground and Vindicates Republicans Along the Way
Redstate
MIT Study: Vaccine Hesitancy Is 'Highly Informed, Scientifically Literate,' and 'Sophisticated'
PJ Media