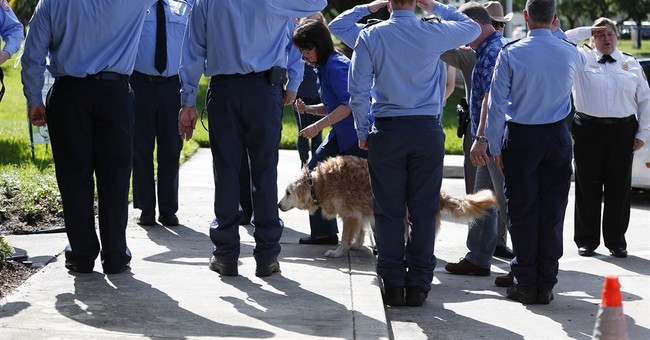 Bretagne, the last known living 9/11 rescue dog, died at the age of 16 on Monday at a veterinary clinic near Houston, Texas.

Bretagne was 2 years old when she and her handler Denise Corliss were sent by the Texas Task Force 1 to Ground Zero to search the rubble. The two spent 10 days in lower Manhattan looking for human remains.

Though she retired from search and rescue at age 10, she continued to give back to her community by helping other search dogs with training. She even volunteered at a local elementary school’s reading program.

But after struggling with “debilitating symptoms of old age” like arthritis and most likely cancer as well, her family was forced to make the difficult decision of euthanizing her, the Houston Chronicle reports.

Dozens of first responders lined the sidewalk to the Fairfield Animal Hospital on Monday to pay their final respects to Bretagne.

Thirty minutes later, they were all still there to say goodbye.

Bretagne didn't look around much. She walked trustingly with her handler past the line of firefighters, her tail swinging limply. Then she stopped. She turned her snout toward the low bush beside the sidewalk, taking a sniff.

She crossed the threshold of the vet's office. Through the window, she looked back outside toward the gathering of firefighters and friends, with a look that might seem like a smile.

About 30 minutes later, the line of firefighters once again snapped to attention, resuming their salute. This time, they had thin black bands stretched across their gleaming silver badges.

Bretagne came out first, in a casket covered with a Texas flag, carried grimly by pallbearers from the search-and-rescue unit. Denise and Randy Corliss followed close behind - their final walk with their "once-in-a-lifetime" dog.

Bretagne would have turned 17 on August 25. Some of you may recall she was thrown an epic sweet 16 party in Manhattan last year as a way to thank her for her service.

"Some may say that the most a dog could be is a pet. However, to the over 400 members of the Cy-Fair Volunteer Fire Department, Bretagne was a civil servant, a hero and is family," the department said in a statement.

She will be missed.