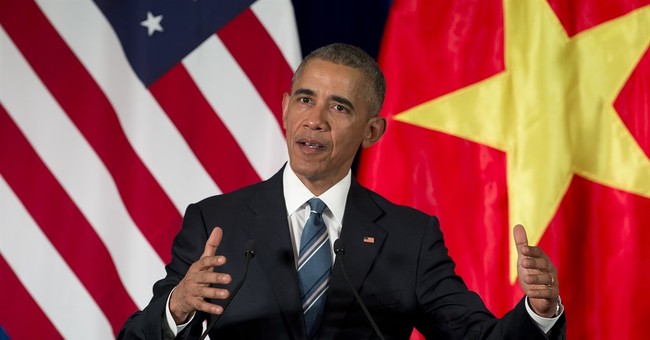 "At this stage both sides have developed a level of trust and cooperation, including between our militaries, that is reflective of common interests and mutual respect," Obama said at a news conference in Hanoi.

“This change will ensure that Vietnam has access to the equipment it needs to defend itself and removes a lingering vestige of the Cold War,” he added.

But the move also comes as a means of boosting the communist nation’s defenses against China, although President Obama denied this.

“The decision to lift the ban was not based on China or any other considerations,” he said. “It was based on our desire to complete what has been a lengthy process of moving towards normalization with Vietnam.

“I want to emphasize that my decision to lift the ban really was more reflective of the changing nature of the relationship.”

Washington partially lifted the embargo on arms in 2014, but Vietnam wanted full access as it tries to deal with China's land reclamation and military construction in the disputed South China Sea. Vietnam has not bought anything, but removing the remaining restrictions shows relations are fully normalized and opens the way to deeper security cooperation.

In Beijing, China's Foreign Ministry outwardly praised the move, with a spokeswoman saying China hoped "normal and friendly" relations between the U.S. and Vietnam would be conducive to regional stability. China itself remains under a weapons embargo imposed by the U.S. and European Union following 1989's bloody military crackdown on pro-democracy demonstrations centered on Beijing's Tiananmen Square.

Obama said the United States and Vietnam had mutual concerns about maritime issues and the importance of maintaining freedom of navigation in the South China Sea. He said that although Washington doesn't take sides on the territorial disputes, it does support a diplomatic resolution based on "international norms" and "not based on who's the bigger party and can throw around their weight a little bit more," a reference to China.

While the announcement is certainly a big step in terms of normalizing relations with Vietnam, Obama added that the country will not immediately be receiving a flood weapons. Each U.S. arms sale, he said, would be reviewed on a case-by-case basis.

“As with all our defense partners, sales will need to still meet strict requirements, including those related to human rights,” he said.

Activists and members of Congress had hoped the president would wait to fully lift the embargo until Vietnam improved its human rights record.