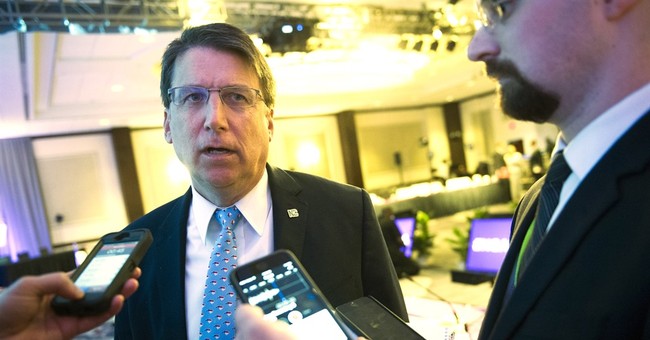 Common sense has prevailed in North Carolina, where legislators on Wednesday put an end to local governments’ anti-discrimination rules that would’ve allowed transgender people to use restrooms depending on their gender identity.

The legislation came after the city of Charlotte approved the broad measure last month. Gov. Pat McCrory, who had been the mayor of the city for 14 years, signed the bill later that day, saying that the legislation was “passed by a bipartisan majority to stop this breach of basic privacy and etiquette.”

The AP reports (emphasis mine):

Although 12 House Democrats joined all Republicans present in voting for the bill in the afternoon, later all Senate Democrats in attendance walked off their chamber floor during the debate in protest. Remaining Senate Republicans gave the legislation unanimous approval.

"We choose not to participate in this farce," Senate Minority Leader Dan Blue of Raleigh said after he left the chamber.

Senate leader Phil Berger of Eden said the Democrats' decision to leave was a "serious breach of their obligation to the citizens that voted to elect them."

Republicans and their allies have said intervening is necessary to protect the safety of women and children from "radical" action by Charlotte. There have been arguments that any man — perhaps a sex offender — could enter a woman's restroom or locker room simply by calling himself transgender.

"It's common sense — biological men should not be in women's showers, locker rooms and bathrooms," said GOP Rep. Dean Arp of Monroe before the chamber voted 82-26 for the legislation after nearly three hours of debate.

The concerns by Republicans and some Democrats were not unfounded. There have been several instances where basic standards of public decency and safety have been violated across the U.S. where similar anti-discrimination measures have been put in place. Here is but one example from many cases Townhall columnist Michael Brown discussed in a February column about Charlotte’s anti-discrimination bill.

“In 2012, also in Washington, female high-school students sharing a college campus swimming pool were shocked to see a 45-year-old male student who identifies as “Colleen” sitting naked in their sauna. (The police report stated that “she” was exposing “her male genitalia.”)

The girls were traumatized and the parents outraged, but college officials said they could not do a thing because of state policies against gender-identity discrimination.”

Not surprisingly, Charlotte’s Mayor Jennifer Roberts (and many other LGBT activists) were appalled by the legislation.

Also in a press release, McCrory fired back that “the basic expectation of privacy in the most personal of settings” was violated by “government overreach and intrusion” on the part of Roberts and the city council.

Civil liberties groups have promised to push for repeal and are currently exploring their legal options.