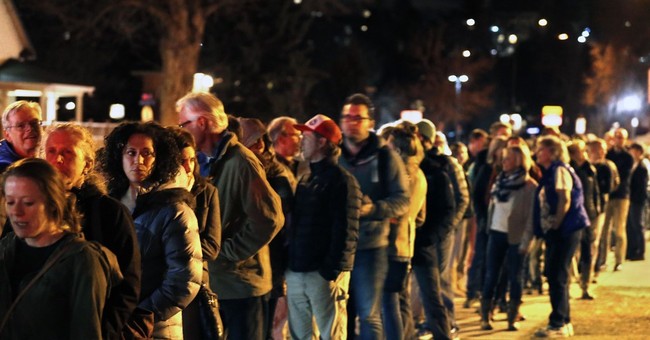 With the polls not yet closed in Arizona, local news outlets were already reporting very high turnout—and that was based on early ballot returns alone.

Of the 1.2 million eligible Maricopa County voters, about 894,000 requested early ballots for the presidential preference election, as the primary is officially known. So far, 54 percent or 464,067 have returned their ballots, according to Maricopa County Recorder Helen Purcell.

"That's a pretty good return at this point," she said. "I'm anticipating we will have between a 60 percent and 65 percent turnout. That includes people going to the polls."

Pima County, the state's second-most-populated county, reported it mailed 224,083 ballots to voters and as of Friday, 61 percent, or 136,946, had been returned.

Between 2000 and 2012, presidential primary turnout has ranged from 30 percent to 51 percent, the latter of which was in 2008 when voters in The Grand Canyon State chose Clinton over Obama in the Democratic race, and McCain over Romney in the Republican one.

Reports of extremely long wait times also indicated heavy voter turnout. Carol Houselog, who worked at a polling place in Phoenix, told The Arizona Republic she was surprised by the number of people who showed up to cast their ballots.

“I’ve never, ever seen a turnout like this even for a regular election, much less a primary,” she said. “I am stunned.”

LONG LINES. They're the theme of the #AZPrimary. Prepare for a 2-3 hour wait. pic.twitter.com/txKSB7FPa9

Long wait times were in part due to fewer polling locations than in 2012 based on a reduced demand for in-person voting.

Additionally, the number of Independents who showed up to vote further complicated matters. Arizona’s primary is unique in that registered Independents are not allowed to vote. One must be affiliated with a political party to cast a vote.

"This election is a completely different animal from all the other elections we have in Arizona," Secretary of State Michele Reagan said, reports The Arizona Republic. "State law requires that voters must be enrolled with a political party to participate. If you are a registered independent, unfortunately you cannot participate."