Despite US Bombing Campaign Against ISIS, Size of Terror Army 'Remains the Same' 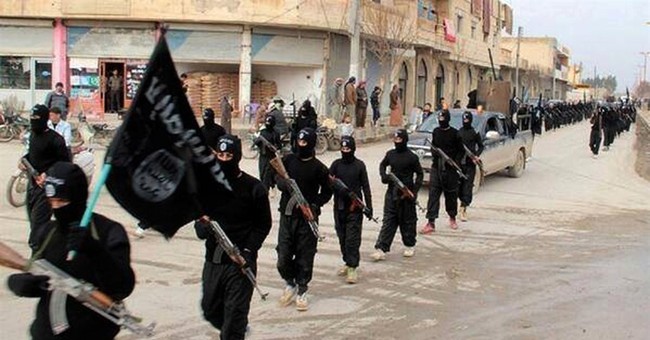 Back in December—and after 15 months of bombing ISIS in an effort to ‘degrade and ultimately destroy’ the terror group—the U.S. military said its munitions supply was running low.

The Air Force had fired more than 20,000 bombs and missiles in Syria, and Air Force Chief of Staff Gen. Mark Welsh admitted they are “expending munitions faster than we can replenish them.”

All this would be less concerning if it was actually making an impact. According to a new report, however, the size of the terror group’s army is the same as it was last year.

The new estimate means that despite more than 10,000 U.S.-led coalition airstrikes against ISIS starting in August 2014, ISIS largely has maintained the size of its force – due in part to an emerging practice of “forced conscription” and an influx of new members, including foreign fighters flocking to ISIS’ self-declared caliphate.

Meanwhile, there are now an estimated 5,000 ISIS fighters in Libya, a defense official told Fox News. “It is getting harder to get into Syria and fighters are being directed to Libya,” the official said.

It’s not all bad news, though. Despite the size of the ‘army’ remaining the same, territory from the terror group has been taken back.

Forty percent of territory has been retaken in Iraq, according to military estimates, while only 5 percent of land has been recaptured in Syria.

The aerial campaign has also helped cut off major supply lines, such as a Highway 47 connecting ISIS headquarters in Raqqa, Syria to its headquarters in Mosul, Iraq, which is helping curb the flow of reinforcement fighters.

So while the bombing efforts of the U.S. and its allies haven't been a total loss, it is discouraging that ISIS' fighting force has not been diminished, especially as it seems the military will not be able to continue apace with the aerial campaign unless funding is in place for the long fight ahead. But with a price tag of more than $9 million per day, how much longer is this strategy really worth supporting?