Kerry: Iranians Releasing Footage of Sailors Made Me 'Angry' 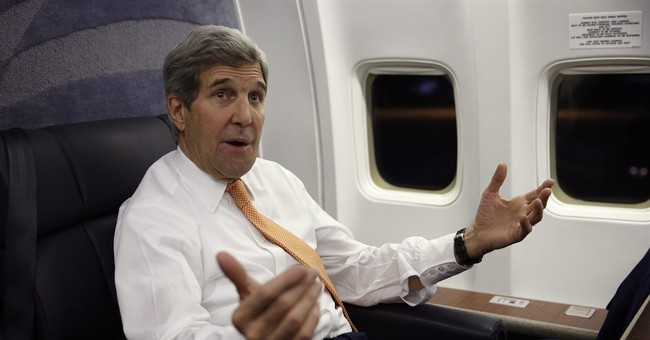 Secretary of State John Kerry has expressed his discontent with the Iranians releasing footage of the 10 U.S. sailors captured last week, which likely violated the Geneva Convention.

“I was very angry. I was very, very frustrated and angry that that was released," he told John Berman on CNN's "New Day" on Monday.

In case you missed it, the footage showed our sailors on their knees with their hands behind their heads being held at gunpoint by Iranian troops. According to the Navy, the troops were also held under machine gunpoint from responding ships.

No fire was exchanged during the incident, but there was what the Navy categorized as as "verbal exchange."

The Navy also said that everything from its ships was accounted for after the incident except for two SIM cards removed from satellite phones.

As was known, the two Navy vessels were traveling together through the Persian Gulf with a scheduled refueling stop along the way. The vessels ended up in Iranian waters and one began to report engine trouble, though it's still not clear how they came to be there.

At 9:10 a.m. ET, the Navy Central Command was informed the ships were being questioned by the Iranians. Roughly 20 minutes later, communications began to deteriorate and were lost altogether 15 minutes after that.

The U.S. began to put together a rescue mission and broadcast their plans in Farsi over open channels to signal to parties in the area.

After three-and-a-half hours, the Navy received word from the Iranians that the sailors were in custody and "safe and healthy."

They were released at 3:43 a.m. ET, when it was already daylight in Iran.

Kerry said Monday that only because of the recent negotiations with Iran was he able to rapidly secure the sailors' release.

While Kerry has now expressed his displeasure at the release of the footage, just last week he was heaping praise on the Iranians for returning the sailors safely.