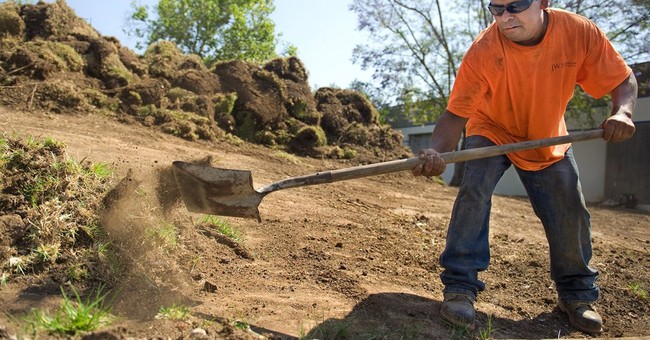 If there are jobs to be had, and employers who will hire them, illegal immigrants will keep coming to the U.S. It’s no surprise, then, that one of the ways the influx could be curbed is through the “serious enforcement of current laws prohibiting the employment of illegals,” which Heritage Foundation senior research fellow Robert Rector has explained in detail.

What would make matters worse, however, is to do just the opposite. And since we’re still in the Age of Obama, that is exactly what’s happening.

President Obama took office vowing to go after unscrupulous employers who hire illegal immigrants, but worksite audits have plunged over the last year and a half, according to a report released Tuesday by the Center for Immigration Studies, tumbling along with the rest of immigration enforcement.

Fewer owners are being arrested, and fewer fines are being collected as well, according to the report, which suggests that even as he offers amnesty to millions of illegal immigrants, Mr. Obama is giving a similar free pass to ever more businesses who provide the jobs magnet that draws them.

Through the first five months of this fiscal year, U.S. Immigration and Customs Enforcement conducted just 181 workplace audits and brought charges against only 27 employers, putting it on pace for fewer than 500 audits and just 65 arrests this year. That’s less than 15 percent of the total audits conducted in 2013.

“Employers now face very little risk in hiring illegal workers and have little incentive to abide by the law,” said Jessica Vaughan, the report’s author, according to the Washington Times.

But it wasn’t always this way. While the Obama administration stopped the Bush-era practice of raiding businesses in person, they did shift to a virtual raid of paperwork to see if a business was hiring illegal immigrants—a practice that “did help at first to create an improved climate of employer compliance,” Vaughan noted. More recently, however, “the deterrence value of the Obama administration's audit strategy appears to be limited,” she continued.

The virtual raids have also slowed during the last year and a half, as have arrests and fines.

“In addition to criminal prosecutions, we continue to fine employers who hire an illegal workforce,” she said.

Indeed, ICE secured more indictments of business managers in 2014 than any other year of the Obama administration, with 194, and earned convictions in 176 cases.

The indictments have dropped dramatically so far in 2015, though, to just 39 for the first eight and a half months of the fiscal year.

Eighty-five percent of Americans believe employers should be required to verify that all new hires are living in the United States legally, according to a 2013 Gallup poll.