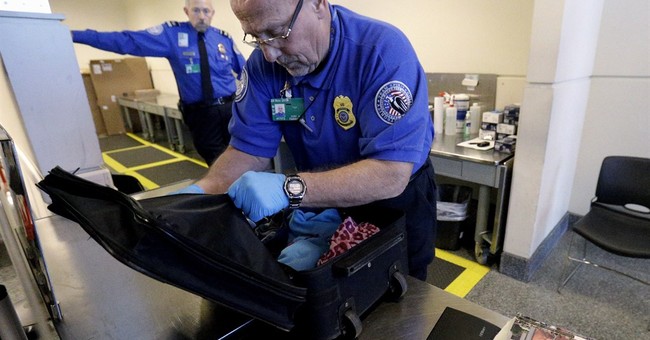 According to an FBI report, the use of Thermite on an aircraft is the “greatest potential incendiary threat to aviation.” Worse yet, the Transportation Security Administration said it would be extremely hard to detect during security screenings and once ignited, there’s no way to extinguish it using conventional methods without making the reaction worse.

The Intercept, which obtained the classified documents, has the details:

Thermite — a mixture of rust and aluminum powder — could be used against a commercial aircraft, TSA warned in a Dec. 2014 document, marked secret[PDF here]. “The ignition of a thermite-based incendiary device on an aircraft at altitude could result in catastrophic damage and the death of every person onboard,” the advisory said.

TSA said it is unlikely to spot an easy-to-assemble thermite-based incendiary device during security screening procedures, and the use of currently available extinguishers carried on aircrafts would create a violent reaction. The TSA warning is based on FBI testing done in 2011, and a subsequent report.

A thermite device, though difficult to ignite, would “produce toxic gasses, which can act as nerve poison, as well as a thick black smoke that will significantly inhibit any potential for in-flight safety officers to address the burn.”

TSA warned federal air marshals not to use customary methods of extinguishing fires — the water or halon fire extinguishers currently found on most aircraft — which would make the reaction worse, creating toxic fumes. Instead, air marshals are told to “recognize a thermite ignition” — but TSA has provided no training or guidance on how to do so, according to multiple sources familiar with the issue.

TSA officers who spoke with The Intercept expressed frustrations over the security reports because they’ve been given no follow-up instructions or training on what to do if they are presented with such a threat onboard.

“We’re supposed to brief our [federal air marshals] to identify a thermite ignition — but they tell us nothing,” one TSA official told The Intercept. “So our guys are Googling, ‘What does thermite look like? How do you extinguish thermite fires?’ This is not at all helpful.”

Other aviation officials who spoke with the news site, also anonymously because they are not authorized to speak to the press, said much the same: “They say to identify something we don’t know how to identify and say there is nothing we can do,” a federal air marshal told The Intercept. “So basically, we hope it’s placed somewhere it does minimal damage, but basically we’re [screwed].”

OK, so we may all be “screwed” if terrorists can get this stuff past security and onto the plane, but explosives experts are saying the operative word is “if.”

Jimmie Oxley, a professor of chemistry at the University of Rhode Island, and an expert in explosives and explosives detection, said thermite — though a theoretical threat — seemed an unlikely candidate to slip through security, particularly since the would-be terrorist would also have to carry an igniter. “You’ve got to get a pound of something that is a really thick mass through security without anyone noticing,” she said. “I find that hard to believe.”

The problem is one of practicalities, said Oxley, who has worked with the FBI and other federal agencies on explosives testing, but was not aware of the specific TSA or FBI reports on thermite obtained by The Intercept. If the hope were to burn a hole through the aircraft, then the thermite would have to be placed on the floor, and then there’s still no guarantee it would take down the aircraft.

Setting off thermite is also impractical, according to Oxley. “Somebody has to give you time to play on the plane,” she said. “Like with the shoe bomber, people do notice if you’re doing something weird in this day and age.”

The FBI did point out in its report, however, that just because the agency has presented information about the threat doesn’t mean terrorists are necessarily interested in it. It turns out they may be more interested in “other types of incendiary materials.”