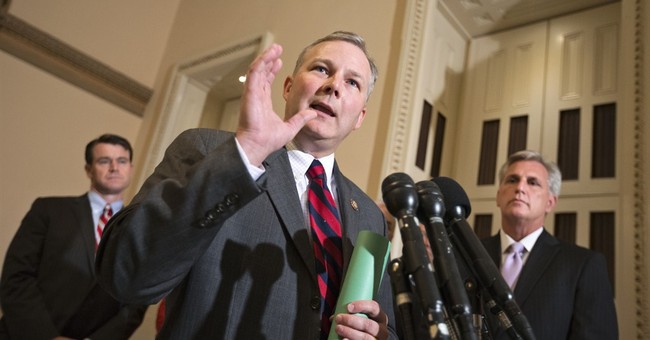 Much can and has been said about the Obama administration’s decision to delay a major component of its own law—the employer mandate—because of its economic effects, political ramifications, and the simple fact that businesses are having a hard time complying. Reps. Tim Griffin (AR) and Todd Young (IN) weighed in on the issue in the GOP’s weekly address today, and called on the administration to exempt all Americans from the law--not just businesses.

“Equal justice under the law is a basic, founding principle of our country,” Griffin said, “so whenever Washington helps businesses and ignores families and workers, Americans have a duty to speak up.”

It’s not fair that the administration did not extend the same delay to hardworking taxpayers, because as Young notes, “the law's mandates are just as daunting for individuals. And they don't have an army of lawyers, lobbyists and accountants at their disposal to make sense of it all”—especially since another 145 pages of regulations were just added to the individual mandate. “How are ordinary citizens supposed to keep up?”

In an attempt to address the concerns of worried Americans, House Republicans acted this week passing a bipartisan bill Griffin introduced authorizing Obama’s delay of the employer mandate. Additionally, the House approved Young’s bill, the Fairness for American Families Act, which extends the same relief to the rest of the country.

“Unfortunately, many Democrats voted to stand with big business and against fairness for individuals and families,” Young said. “President Obama threatened to veto our proposals altogether. We take that to mean he thinks it's fair to let businesses off the hook while leaving middle-class families in harm's way.”

In the name of fairness, however, Republicans are urging the president to reconsider his veto threat, and calling on Senate Democrats to vote on their proposals immediately.

“Bottom line: The sooner we can delay, dismantle, and repeal the president's health care law, the sooner we can get people back to work and focus on expanding opportunity for everyone,” Young said.