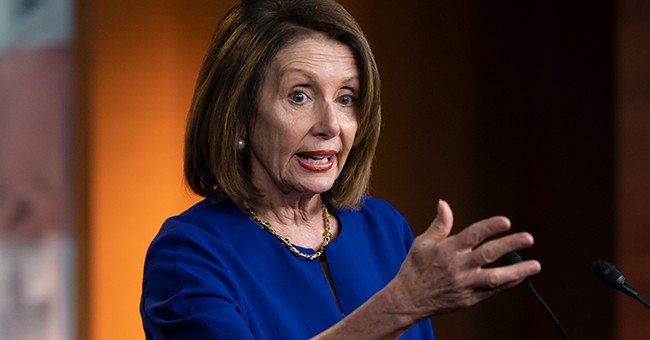 House Speaker Nancy Pelosi (D-CA) had some advice for former Vice President and like 2020 presidential contender Joe Biden Tuesday after a couple of women came forward saying that he had behaved inappropriately towards them.

Pelosi echoed what she’d said Monday that she didn’t consider the alleged behavior “disqualifying,” but she also gave some advice to Biden in her chat with Politico.

“I’m a member of the straight-arm club, I’m a straight armer,” she laughed gesturing to demonstrate that she kept people at arm’s length. “I just pretend that you have a cold and I have a cold.”

Pelosi reflected on the importance of respecting how people perceive things.

“I think it’s important for the vice president and others to understand is it isn’t what you intended it’s how it was received and that’s about communication in general,” she emphasized.

She also argued that in such situations “to say 'I’m sorry that you were offended' is not an apology.”

Pelosi said that someone ought to say, “’I’m sorry I invaded your space but not I’m sorry you were offended’” because apologizing that someone’s offended is “not accepting the fact that people think differently about communication.”

.@SpeakerPelosi on allegations against Joe Biden: "I don't think it's disqualifying…I think that it's important for the vice president and others to understand is it isn't what was intended it's how it was received…To say, 'I'm sorry that you were offended' is not an apology." pic.twitter.com/0TjJVORlXM

“He’s an affectionate person,” she said of Biden, inviting him to “join the straight-arm club with me, if you will.”

“He has to understand in the world that we’re in now that people’s space is important to them and what’s important is how they receive it not necessarily how you intended it,” she added.

In a statement Sunday, Biden said it was never his intention to behave inappropriately.

“In my many years on the campaign trail and in public life, I have offered countless handshakes, hugs, expressions of affection, support and comfort,” he said. “And not once – never – did I believe I acted inappropriately.”

“If it is suggested I did so, I will listen respectfully. But it was never my intention,” he added.