Dem Rep. Nadler Says He 'Expects the President to Lie to the American People' in Upcoming Address 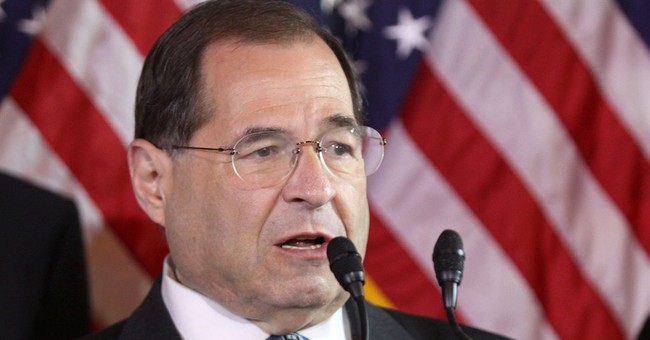 House Judiciary Committee chair Rep. Jerry Nadler (D-NY) said he expects President Trump to “lie to the American people” in his upcoming address regarding the crisis at the southern border.

After a tour of a Customs and Border Protection facility in New Mexico, Nadler argued that there was no national security crisis at the border.

“Just yesterday his press secretary said in an interview with Chris Wallace that 4,000 people, 4,000 terrorists rather had crossed the border,” he continued. “Chris Wallace pointed out that they had all been apprehended at airports, none at the border. There’s no security crisis at the border.”

Nadler went on to argue that the president does not have the authority to declare a national emergency in order to bypass Congress and build a wall along the border. President Trump suggested he may do this Friday.

“The president has no authority to usurp congressional authority of the purse,” Nadler said. “Congress must appropriate funds. He cannot simply take funds appropriated for other purposes to build a wall because he declares a national emergency.”

He even argued that such an attempt would make Trump a “tyrant” and that the suggestion was his most “dangerous” yet.

“The courts should not permit it and I do not believe the courts will permit it and we would certainly oppose any attempts by the president to make himself a king and a tyrant by saying that he can appropriate money without Congress,” he said. “That is perhaps the most dangerous thing he is talking about since he became president.”

Nadler made the remarks just outside the Alamogordo, New Mexico Border Patrol Station where 8-year-old Felipe Gómez Alonzo was detained prior to his death in CBP custody on Christmas Eve. In response to that death, CBP announced that it would be conducting regular health checks on the children in their custody.

Share this on Facebook
Tweet
Virginia Democratic Party Files Complaint Against Youngkin Campaign, Claims Ads Failed Disclaimer Requirements
Landon Mion
In Final Weeks of Virginia's Gubernatorial Race, It's Clear Where Momentum Is
Rebecca Downs
Trump Has An Idea on Who Should Run for Governor of Wisconsin
Rebecca Downs
Democrats Have Some Really Bad News for Fierce Trump Critic Adam Kinzinger
Rebecca Downs
President Joe Biden May Not Be Able to Escape This Major Crisis Before the Midterms