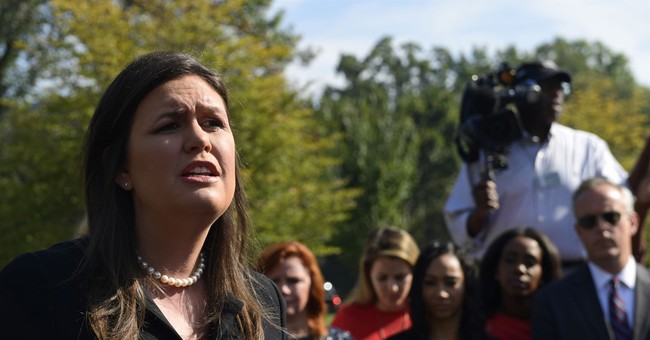 White House Press Secretary Sarah Huckabee Sanders tweeted a condemnation of CNN Thursday after they targeted U.S. troops in Iraq because some of the troops displayed hats and logos supporting President Trump during his visit.

“CNN will attack anyone who supports President Trump, including the brave men and women of our military who fight everyday to protect our freedom,” she tweeted.

CNN will attack anyone who supports President Trump, including the brave men and women of our military who fight everyday to protect our freedom https://t.co/x6VjuUJFdF

In the article Sanders linked to in her tweet, CNN argued that the troops with Trump “Make America Great Again” hats may have violated Department of Defense guidelines saying that "active duty personnel may not engage in partisan political activities and all military personnel should avoid the inference that their political activities imply or appear to imply DoD sponsorship, approval, or endorsement of a political candidate, campaign, or cause."

“A US military official told CNN the MAGA hats that Trump signed at the Ramstein Air Base event in Germany were personal and brought there by military personnel in hopes of getting an autograph,” CNN noted. “The official contended that it was not a campaign event and that the hats were used as support for Trump, not as a statement of political support.”

Capt. Christopher Bowyer-Meeder, a spokesperson for the US Air Force, Europe, told CNN that no policy violations have been brought forward and that “there is no rule against Airmen bringing personal items to be signed by the president.”