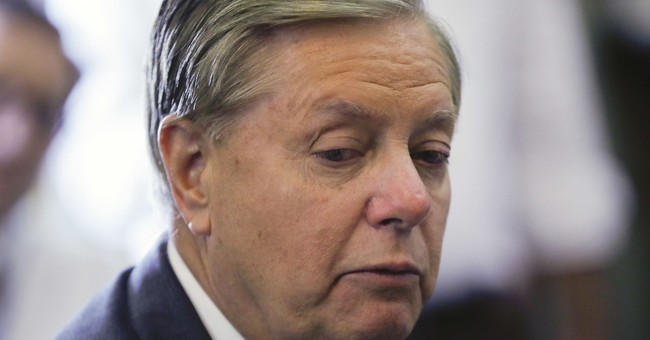 CNN’s Alisyn Camerota took offense Thursday at Sen. Lindsey Graham’s (R-SC) use of the phrase “fake news” to describe President Trump’s claim that the terrorist group ISIS has been defeated in Syria.

“We have been dishonorable," he said. "This is a stain on the honor of the United States. I hope and pray the President will reconsider this. To those who say we have defeated ISIS in Syria, that is that an inaccurate statement.”

“They have been hurt,” he continued. “They have been degraded, and I give the President all the credit in the world for changing our policies regarding the fight against ISIS, but I will not buy into the narrative that they have been defeated. To say they're defeated is an overstatement and is fake news.”

An incensed Camerota interpreted the “fake news” comment as a slight on the media despite the fact that it was clearly directed at President Trump. She also implied that Graham’s condemnation of Trump was too weak.

"No, Senator, no, it's not fake news,” she commented. “The president is not a newscaster. If you don't like what the president's decision is, just tell him that. Sorry, not everything can be the media's fault today.”

“That was Lindsey Graham I guess, Joe, getting as close as he can to telling the president that he’s making a big mistake," she added.

GOP lawmakers are slamming President Trump over his plan to withdraw troops out of Syria. One senior administration official says the decision is "a mistake of colossal proportions”@sam_vinograd, @joshscampbell, @mattsgorman and @joelockhart discuss: https://t.co/WFWsw4L10h pic.twitter.com/RaBBmm3BTw