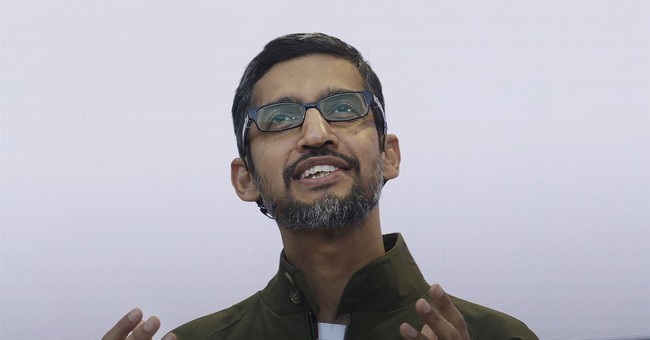 Rep. Sheila Jackson Lee (D-TX) asked Pichai about the potential that Google would be contributing to the oppression of Chinese people who are “looking for a lifeline of freedom and democracy.”

Pichai replied that Google has “no plans” to launch a censored search engine in China…for now.

He claimed that he is “committed to being fully transparent, including with policy-makers, to the extent that we ever develop plans to do that.”

Rep. Tom Marino (R-PA) asked how working with the China’s government on censorship would be compatible with Google’s values.

“We always have evidence, based on every country we have operated in, us reaching out and giving users more information has a very positive impact, and we feel that calling,” Pichai replied, “but right now there are no plans to launch in China.”

However, despite his repeated insistence that the company had no plans to launch in China, Pachai would not directly answer some rather pointed questions from Rep. David Cicilline (D-RI).

"Are there any current discussions with members of the Chinese government about this?" Cicilline asked.

"This effort currently is an internal effort,” Pichai replied, “and I’m happy to … be transparent to the extent we take steps towards launching a product in China."

He also remarked that the company had explored what such an engine would look like.

"We have explored what search could look like if it were launched in a country like China," he said, admitting that work had been "underway for a while."

"At one point we have had over 100 people working on it, is my understanding," he said.

Cicilline later asked if Pichai would “rule out launching a tool for surveillance and censorship in China” while he is CEO at Google.

"One of the things that is important to us as a company,” Pichai said, “we think it’s in our duty to explore possibilities, to give users access to information. I have that commitment. We’ll be very thoughtful and we will engage widely as we make progress."

One protestor at the hearing held a Chinese flag with the Google logo on it.

Earlier, Capitol police removed someone holding a sign during the hearing. It appeared to show a Google logo altered to resemble the flag of China pic.twitter.com/jwCYRdg3Ld

Last month, thousands of Google employees signed a letter in protest of “Project Dragonfly.” Amnesty International also called on the tech giant to abandon the project.

“This is a watershed moment for Google. As the world’s number one search engine, it should be fighting for an internet where information is freely accessible to everyone, not backing the Chinese government’s dystopian alternative,” Joe Westby, Amnesty International’s Researcher on Technology and Human Rights said in a statement.