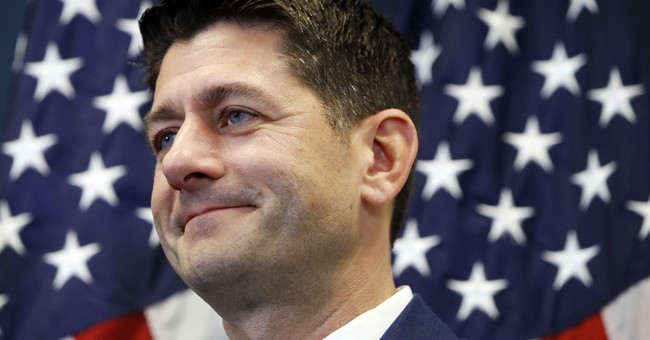 House Speaker Paul Ryan (R-WI) named incoming Sen. Mitt Romney (R-UT), his friend and former running mate, as someone who can be a “standard-bearer” for Republicans. The retiring House Speaker also reflected on his accomplishments and regrets during an interview Thursday with The Washington Post.

"It’s great that he’s coming and I think he feels a sense of civic duty,” Ryan said of his old friend. “I think with John McCain passing, for example, Mitt believes that there’s a role for him in our party in being you know a statesman and a standard-bearer in our party.”

“I would look to him as a leader who will be a standard-bearer of our principles,” he emphasized.

Romney called then-candidate Trump a "phony" and a "fraud" during the 2016 presidential race but has recently refrained from publicly attacking him. Trump endorsed Romney for his Utah Senate run.

Ryan spoke about President Trump’s frequent sparring with the press and expressed concerns about tribalism and the media’s incentive model.

“It’s a little bit of a two-way street,” he said, “the tribalism is just getting out of control and I see…the 21st century business model of getting hits and clicks and eyeballs on cable news, on websites has created this incentive structure and marketplace where polarization sells.”

.@SpeakerRyan: "Yes, the president has a hostile relationship with the press…but, I think this is what the new norm is in this day in age and we've gotta figure out what the heck we do about it."

"Yes, the president has a hostile relationship with the press, no two ways about it. But that's the new norm in this day and age," he concluded.

Speaking to the possibility of a government shutdown over President Trump’s demanded funding for the border wall, Ryan said, "our hope is that we can get a successful conclusion." He does not think the president wants to see a shutdown.

Ryan said that the failure to pay off the national debt and to pass an immigration overhaul were his two regrets.

He added that he thought "history is going to be very good to this majority" because of the historic tax reform bill.