Rep. Mia Love Goes After Trump, Says GOP Has a Problem With Minorities in Concession Speech 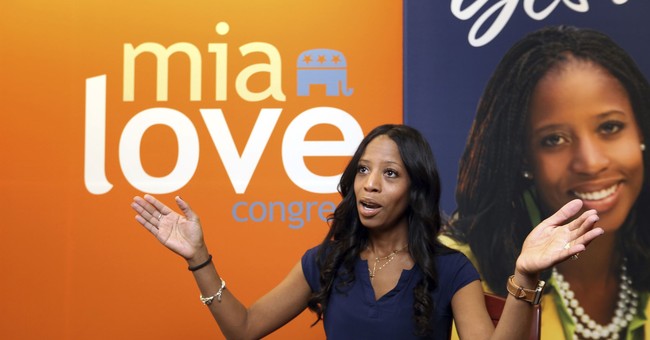 Rep. Mia Love (R-UT) conceded her Utah congressional race to Democratic challenger Ben McAdams Monday in a speech that went after President Trump and the Republican Party. She lost the race for Utah's 4th Congressional district by a narrow margin.

President Trump predicted Love’s loss earlier this month in a speech calling out GOP candidates who distanced themselves from him in the midterm elections.

“Mia Love gave me no love and she lost,” Trump quipped at the time. “Too bad. Sorry about that, Mia.”

Love replied to that comment Monday, saying it gave her a “clear vision” of “his world as it is.”

"The President's behavior towards me made me wonder: what did he have to gain by saying such a thing about a fellow Republican," Love said. "It was not really about asking him to do more, was it? Or was it something else? Well Mr. President, we'll have to chat about that."

"However, this gave me a clear vision of his world as it is,” she added. “No real relationships, just convenient transactions. That is an insufficient way to implement sincere service and policy."

Love went on to argue that Republican politicians have problems with minorities and black Americans.

"This election experience and these comments shines a spotlight on the problems Washington politicians have with minorities and black Americans -- it's transactional, it's not personal," she claimed.

"You see, we feel like politicians claim they know what's best for us from a safe distance, yet they're never willing to take us home,” she continued, “because Republicans never take minority communities into their home and citizens into their homes and into their hearts, they stay with Democrats and bureaucrats in Washington because they do take them home -- or at least make them feel like they have a home."

Love said that she is still a Republican and a conservative but that the GOP has a real problem with minorities.

“I am a Republican, I know conservative policies work,” she emphasized. “The problem is not the policy, it’s that we are never taken into hearts and into homes.”