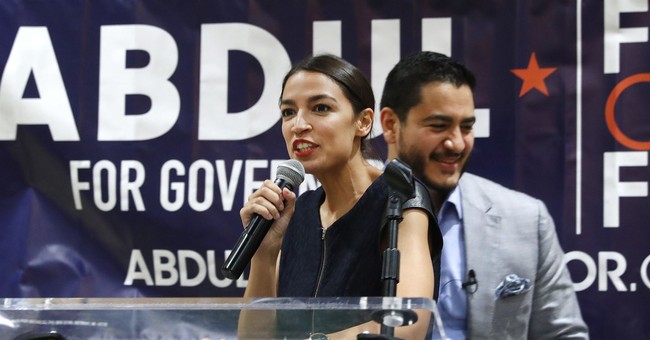 Alexandria Ocasio-Cortez, the youngest woman elected to Congress and a Democratic socialist, told The New York Times Wednesday that she can’t afford an apartment in D.C. until she gets her Congressional salary in three months.

Ocasio-Cortez, 29, said the transition period will be “very unusual, because I can’t really take a salary. I have three months without a salary before I’m a member of Congress. So, how do I get an apartment? Those little things are very real.”

She added that she has saved money before leaving her bartending job and “planned accordingly with her partner.”

“We’re kind of just dealing with the logistics of it day by day, but I’ve really been just kind of squirreling away and then hoping that gets me to January,” she said.

Ocasio-Cortez tweeted about the issue Thursday arguing that it was an example of “many little ways in which our electoral system isn’t even designed (nor prepared) for working-class people to lead.”

NBC noted that Ocasio-Cortez will make $174,000 a year as a member of Congress and that the median rent for a one-bedroom apartment in D.C. is $2,170 a month, making it the seventh-highest rent in the nation.

However, Ocasio-Cortez is moving from New York which has the second highest median rent in the nation for a one bedroom apartment costing $2,850 a month.

As Townhall noted earlier this year, reports, including from Harvard and the New Democrat Coalition, indicate that the affordable housing crisis is exacerbated by burdensome government regulations.

According to one recent report, released in June by the National Association of Home Builders (NAHB) and the National Multifamily Housing Council (NMHC), “regulation imposed by all levels of government accounts for an average of 32.1 percent of multifamily development costs,” and “in a quarter of cases, that number can reach as high as 42.6 percent.”

Ocasio-Cortez believes that housing is "a human right" and "Congress must tip the balance away from housing as a gambling chip for Wall Street banks and fight for accessible housing that's actually within working families' reach."

Her solution to the crisis, however, is not deregulation but costly government intervention. She wants to "give tax benefits to working- and middle-class homeowners, expand the Low Income Housing Tax Credit, provide housing for the homeless, and permanently fund the National Affordable Housing Trust Fund."

Some on Twitter who disagreed with her politically did sympathize with her difficulty with the cost of housing in the city.

I am no fan of Alexandria Ocasio-Cortez, but I'm a bit mystified that people are making fun of her for having trouble finding/affording housing in DC. That's, uh, a very relatable problem!

This is actually correct. There, I said it, OCASIO-CORTEZ IS RIGHT. https://t.co/jAeeTYTMsK