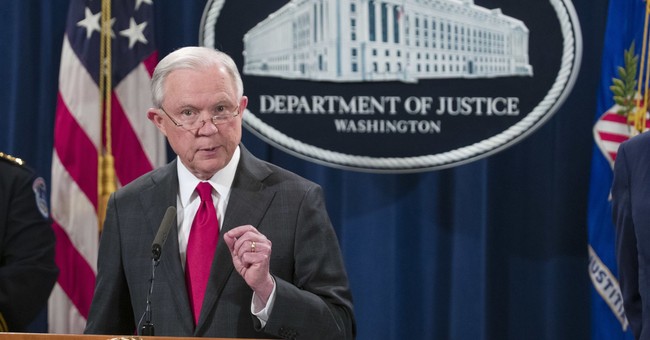 Attorney General Jeff Sessions responded Monday to protesters who interrupted his speech to the Boston Lawyers Chapter of the Federalist Society on religious liberty. Sessions responded with a brief comment regarding the “heckler’s veto” and a defense of his stance on immigration.

As he was escorted out, Sessions politely commented, “Well thank you for those remarks but I would just tell you we do our best every day to fulfill my responsibility to enforce the laws of the United States.”

Another protester, who said he was a pastor, stood up and tried to talk over Sessions saying, “I thought you were here to protect religious liberty, I am a pastor of a Baptist church and you are escorting me out for exercising my religious freedom, that doesn’t make any sense.”

Sessions then explained the notion of the heckler’s veto.

“Thank you all for your comments and we’re glad to hear them,” he said, “but that’s pretty close to what we refer to as the heckler’s veto: the ability of one individual to prevent others in a proper forum to be able to express a hopefully coherent thought about a serious subject.”

The attorney general went on to defend his immigration positions, arguing that he did not believe they were contrary to his faith.

Jeff Sessions responds to protesters: "I don't believe there's anything in my theology that says a secular nationstate cannot have lawful laws to control immigration ... not immoral, not indecent and not unkind to state what your laws are and then set about to enforce them" pic.twitter.com/oGjtMM67ru

"I don’t think there’s anything in the Scripture, I don't believe there's anything in my theology that says a secular nation-state cannot have lawful laws to control immigration in its country and that’s what we’re talking about,” he said.

“It’s not immoral, not indecent, and not unkind to state what your laws are and then set about to enforce them, in my view,” he emphasized. “I feel like that’s my responsibility and that’s what I intend to do."

In the past, Sessions has cited Scripture in defense of U.S. immigration policy.

In June, he responded to criticism of immigration policies from religious leaders saying, "my request to our religious leaders and friends who have criticized the carrying out of our laws: I ask them to speak up forcefully, strongly, to urge anyone who would come here to only come lawfully."