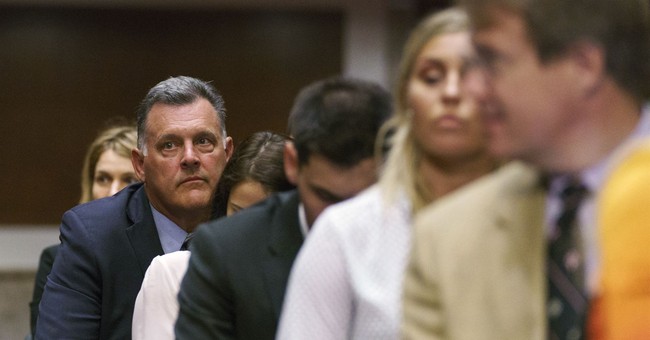 The former head of USA Gymnastics, Steve Penny, was arrested Wednesday on charges of tampering with evidence in the case of Larry Nassar who is now in prison for sexually abusing gymnasts for years under the pretense of medical treatment.

According to the Walker County District Attorney’s Office in Huntsville, Texas, Penny was arrested by a fugitive task force while he was staying in a cabin in Gatlinburg, Tennessee.

Penny is reportedly awaiting extradition to Texas at the Sevier County Jail.

The indictment says that Penny removed documents from the Karolyi Ranch training facility in Walker County, Texas with "the purpose of impairing the ongoing investigation by destroying or hiding the documents," once he learned authorities were investigating Nassar.

The documents would have assisted in the Nassar investigation and would have "assisted with the investigation of other offenses that may have occurred at the Karolyi Ranch," the district attorney's office said in a statement to CNN.

The third-degree felony charge of tampering with evidence could mean up to ten years in prison for Penny.

Penny had been the president and CEO of USA Gymnastics for 12 years and resigned last year when the organization faced scrutiny as the Nassar scandal came to light.

Nassar has been sentenced to 40 to 175 years in Michigan for his abuse of young athletes and he is now facing six counts of sexual assault of a child in Texas, according to prosecutors. At this point 265 girls, including Olympic gymnasts, say he molested them under the guise of medical treatment.

Texas rangers opened an investigation into abuse at the training center in Texas after a number of gymnasts said they had been assaulted there.