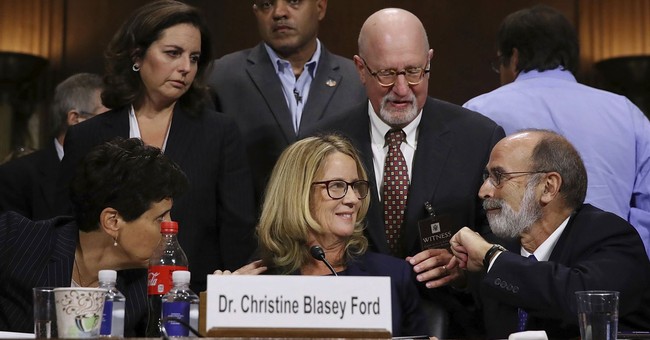 Debra Katz and Lisa Banks, lawyers for Dr. Christine Blasey Ford, told Senate Judiciary Committee Chairman Chuck Grassley (R-IA) Wednesday that they would turn over the notes from her therapy sessions and recordings of the lie detector test that he had requested but only when the FBI interviews Ford.

Ford claims that Supreme Court nominee Judge Brett Kavanaugh groped her and attempted to rape her when he was drunk at a high school party.

The lawyers note that they “have not yet heard from the FBI about scheduling an interview with her.”

Ford’s lawyers tell Grassley that they will provide her therapy notes, polygraph data to the FBI once she is interviewed (that hasn’t happened as of now) pic.twitter.com/t1N6jhDPwE

"I write to renew my requests for material evidence relevant to allegations of sexual assault made by your client, Dr. Christine Blasey Ford, against Judge Brett Kavanaugh,” he said. “During the hearing last week, Senator Kamala Harris argued that it was only fair for senators on the Committee to see the evidence that the witness was being asked to address. The same principle applies to this request."

"Your continued withholding of material evidence despite multiple requests is unacceptable as the Senate exercises its constitutional responsibility of advice and consent for a judicial nomination,” he added. “I urge you to comply promptly with my requests."

The Senate plans to vote this week on Kavanaugh's nomination after the FBI concludes its investigation into the allegations.