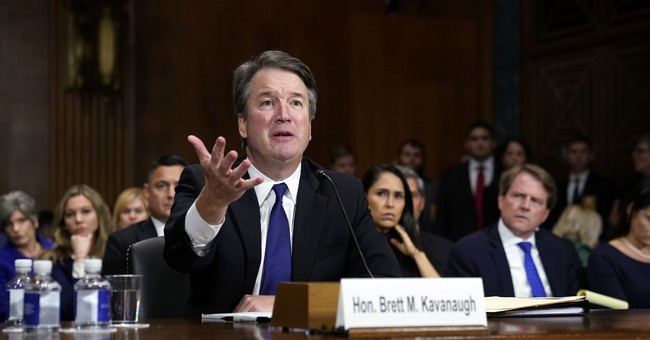 Sunny Hostin, “The View” co-host and a former sex crimes prosecutor, commented on ABC Thursday that, based on Supreme Court Justice nominee Judge Brett Kavanaugh’s emotional testimony denying sexual misconduct allegations, she could imagine him as a “mean drunk.”

“I thought that the tone was all wrong,” Hostin commented after Judge Kavanaugh’s impassioned opening statement and initial questioning. “I thought that he didn’t exhibit the temperament of a judge or certainly not a Supreme Court Justice. He’s had many people say that he’s aggressive and a mean drunk and I will tell you after seeing that display I don’t think it’s hard to imagine him as an aggressive drunk, mean drunk.”

Kavanaugh faced a lot of questioning from Democrats regarding his freshman college roommate James Roche's claims that "he became aggressive and belligerent when he was very drunk."

Kavanaugh denied Roche's characterization, citing a confidential Senate Judiciary Committee report regarding Roche and a contention he had with Kavanaugh and another person. While he did not want to go into it in a public hearing, he told senators to assess Roche's credibility with the information he gave them about Roche in mind.

Hostin claimed that Kavanaugh's tone "in and of itself will turn off many women."

“I know it turned me off," she said. "We saw him sneering, he’s blaming the committee members for unleashing this upon him rather than addressing the allegations made not by one, not two, but three women who don’t know each other.”

The first of the three allegations against Kavanaugh came out after his confirmation hearings in an initially confidential letter from Dr. Christine Blasey Ford who alleges that Kavanaugh groped her and pinned her down while he was drunk at a party in high school.

The witnesses she initially claimed were present have denied that such an event occurred.

Ford struggled with certain facts during questioning such as whether or not she showed therapy notes to the Washington Post, why her fear of flying was cited as a reason for not coming to the hearing despite her having traveled extensively for vacation, and what day she took a polygraph test.

The last and perhaps most outlandish allegation was brought forward by Michael Avenatti, who represents adult film star Stormy Daniels in her case against the president. Avenatti came forward Tuesday representing Julie Swetnick, a woman accusing Kavanaugh of being part of a group of high school guys that spiked the punch at parties and gang raped girls.

Sara Fagen, a GOP strategist who worked with Kavanaugh in the George W. Bush White House, rebuked Hostin’s remark saying it made sense that Kavanaugh would be angry after being accused of attempted rape and gang rape.

"He certainly was angry and rightfully so,” she told ABC, “that’s ridiculous when you stop and think what he’s been through for him to have any other reaction.”

“In the light of what has happened in the past two weeks he had an emotional reaction at a hearing and ‘well imagine what a mean drunk he would have been 37 years ago?’ Give me a break,” she said in reply to Hostin.