Chris Wallace Grills Putin on Russian Interference, the Deaths of His Political Rivals, and Bombing Civilians 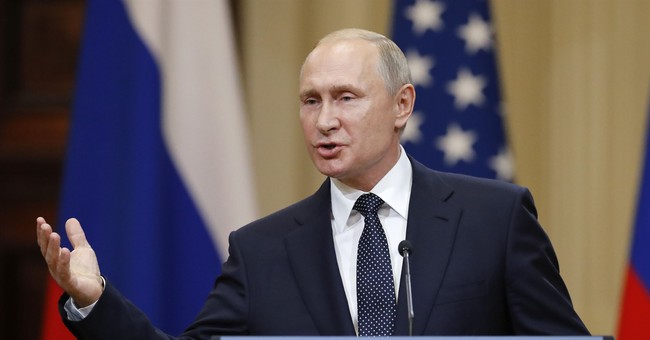 Following his press conference with President Trump, Russian president Vladimir Putin sat down Monday with Fox News’ Chris Wallace for an exclusive interview. Wallace attempted to hand Putin a copy of special counsel Robert Mueller's indictment of a dozen Russian officials. The indictment accuses these officials of working to hack the servers of the Democratic Congressional Campaign Committee and the Democratic National Committee during the 2016 presidential election cycle.

Putin did not touch the indictment and dismissed the claims as “ridiculous.”

Russian President Putin when pressed on his country's alleged interference in the U.S. elections and indictments against Russian nationals: Russia as a state has never interfered with the internal affairs of the United States. #WallacePutinOnFox https://t.co/OqrOzjYveR pic.twitter.com/EzEYyttOmu

He also denied having “kompromat” or "compromising material" on Trump.

“We don't have anything on them,” Putin said.

Wallace pressed Putin on why so many of his political opponents end up dead. Putin responded by attempting to equate those killings to the assassinations of John F. Kennedy and Martin Luther King Jr.

Russian President Putin on his political opponents ending up dead: Russia's statehood is maturing and there are some side effects, and we persecute people responsible for these crimes. #WallacePutinOnFox https://t.co/yXKIFfe4pQ pic.twitter.com/iPgyT2YyZO

“Haven't presidents been killed in the United States?” Putin replied. “Have you forgotten about - well, has [President John F.] Kennedy been killed in Russia or in the United States? Or [Dr. Martin Luther] King? And what happens to the clashes between police and, well, civil society, and some -- several ethnic groups? Well, that's something that happens on the U.S. soil. All of us have our own set of domestic problems.”

Wallace asked Putin if he had qualms about bombing innocent civilians and cited Russia’s involvement in bombing civilians in Syria.

“You know, when there is warfare going on -- and this is the worst thing that can happen for humankind – victims are inevitable, and there will always be a question of who’s to blame,” Putin replied. “I think it is the terrorist groups who are to blame who destabilized the situation in the country.”

Russian President Putin on civilian causalities in Syria: Victims are inevitable and there [will] always be a question who's to blame. I think it is the terrorist groups who are to blame who destabilized this situation in the country. https://t.co/ftLPlwjjtE pic.twitter.com/sLjoOjlcSl

Putin added that Wallace was “completely deceived,” saying, “I am very sorry that you do not know the real situation…about Syria.”