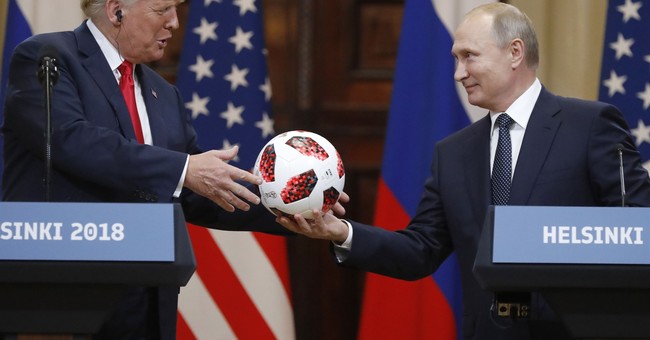 After Putin handed Trump the ball, the president remarked that the ball would go to his son Barron and playfully tossed it to first lady Melania.

"If it were me, I’d check the soccer ball for listening devices and never allow it in the White House," Graham tweeted.

Finally, if it were me, I’d check the soccer ball for listening devices and never allow it in the White House.

In a series of tweets, Graham joined a chorus of Republican senators who criticized Trump’s remarks downplaying Russian interference in the 2016 presidential election during a press conference with Putin.

“Missed opportunity by President Trump to firmly hold Russia accountable for 2016 meddling and deliver a strong warning regarding future elections,” he commented. “This answer by President Trump will be seen by Russia as a sign of weakness and create far more problems than it solves.”

It is imperative that Congress hold hearings on the extent and scope of any cooperation with Russia in Syria regarding Iran’s presence.

A better thing, Mr. President, would be to declare: "Russia is the enemy of America and our allies, and we will expose and respond to their continued cyber-attacks against our nation." https://t.co/qNvgGRA58T