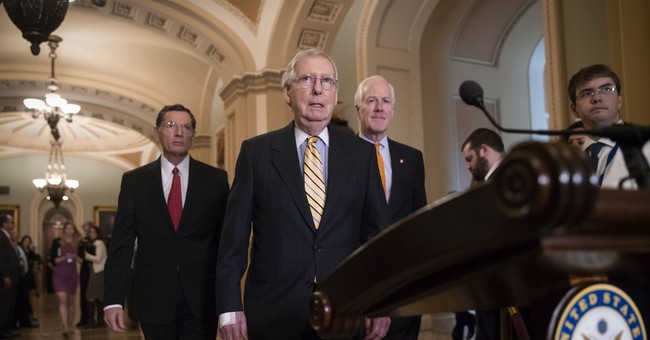 “I support and all of the members of the Republican conference support a plan that keeps families together while their immigration status is determined,” McConnell told reporters. “We had a very robust discussion at lunch about the need to fix the problem.”

“We hope to reach out to the Democrats and see if we can get a result which means making a law and not just get into some sort of sparring back and forth that leads to no conclusion,” he added.

When asked if the issue will “tar” Republicans in the upcoming midterms, McConnell said, “it’s not going to tar anybody, we’re going to fix the problem.”

McConnell said it would a “narrow agreement” because “in order to fix this problem you can’t fix all the problems because obviously, we’ve wrestled with this issue for a decade.”

McConnell pointed to the fairly clear consensus that families should no longer be separated at the border.

He said Sens. John Cornyn (R-TX) and Ted Cruz (R-TX) are already working on solutions to the problem.

Cornyn said he believes families can be moved to the front of the line for processing and be kept in “a humane, safe, and secure family facility.”

“Some people have said that the only way to do that is to not enforce the law which I believe is a false choice,” he told reporters. “We can both keep families together while we expedite their ability to appear before an immigration judge and present their claim for an immigration benefit on a short timetable.”

Cornyn said he hopes for a fix to be ready “in a matter of days.”