Kim Kardashian Responds to Critics of Meeting With Trump: 'It Wasn't About Policies' 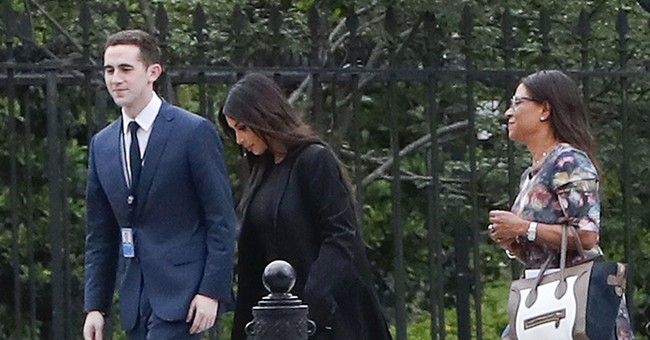 Kim Kardashian West spoke with CNN’s Van Jones Thursday about her meeting in the Oval Office with President Trump to advocate for Alice Johnson, who was serving a life sentence for a first-time nonviolent drug offense. Trump commuted Johnson’s sentence shortly after the meeting.

During the interview, Jones asked Kardashian how she dealt with the potential backlash from the meeting and the risk of giving Trump legitimacy or becoming his “political pawn.”

“I think Kanye’s already given him legitimacy in that way,” Kardashian replied. “I was working on this before so I don’t think I would be used. At the end of the day, he heard me out. We got the job done. What could he really use me for?”

Kardashian said that she went to the meeting knowing there would be backlash.

“When I got the meeting, I knew there was going to be tons of backlash,” she said, “I knew people wouldn't understand it. And at that point, I had to make the decision that this was bigger than me."

She explained that her focus was on getting justice for Johnson.

“I’m worried about my brand and it’s like a woman’s been in jail for 22 years almost, that just to me there was like, it wasn’t even a question,” she emphasized. “I would’ve taken the backlash no matter what the outcome would’ve been just to try for her and I’m glad it worked out obviously.”

She added that she does respect celebrities who refuse to meet with President Trump.

“Everyone can do what they want to do,” she said. “I never judge other people and I do think sometimes situations are different.”

Kardashian said that, for her, it was about separating her feelings on other policies in order to change a life.

“I just am focused and I could separate my feelings on certain policies,” she explained. “To me it wasn’t about policies, it was about I can change someone’s life and if I have the opportunity to do that, it just wasn’t even a question for me.”

Alice Johnson, 63, thanked Kardashian and Trump Wednesday before her emotional reunion with her family.