House Chaplain Rescinds His Resignation, Update: Ryan Will Allow Him to Remain Chaplain 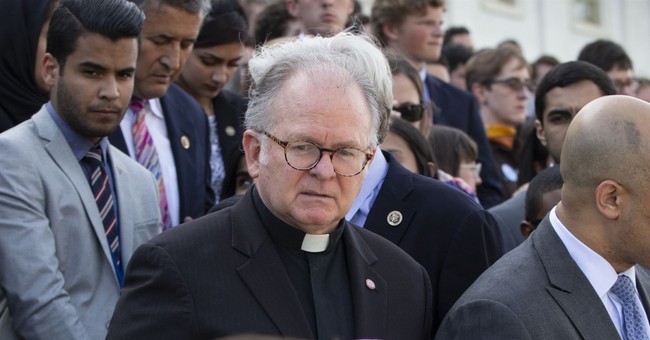 “I have accepted Father Conroy’s letter and decided that he will remain in his position as Chaplain of the House. My original decision was made in what I believed to be the best interest of this institution. To be clear, that decision was based on my duty to ensure that the House has the kind of pastoral services that it deserves. It is my job as speaker to do what is best for this body, and I know that this body is not well served by a protracted fight over such an important post. I intend to sit down with Father Conroy early next week so that we can move forward for the good of the whole House.”

Fr. Patrick Conroy, a Jesuit priest who resigned from his post as House chaplain in April and has since said it was due to pressure from House Speaker Paul Ryan (R-WI), is now rescinding his resignation and says he plans to remain in the position for at least the remainder of the year. The Washington Post first reported Thursday that Conroy sent a letter to Ryan rescinding his resignation.

“I have never been disciplined, nor reprimanded, nor have I ever heard a complaint about my ministry during my time as House chaplain,” Conroy wrote in the letter.

Conroy wrote that he initially gave into pressure to resign, believing that Ryan had the power to fire him but believes now that Ryan pressured him into resigning for lack of cause.

He also claimed that Ryan's chief of staff, Jonathan Burks, met with him on April 13 asking for a letter of resignation. Conroy wrote that when he asked if he was being fired for cause, Burks "mentioned dismissively something like 'maybe it's time that we had a chaplain that wasn't Catholic.'" He said Burks also mentioned a prayer he said in November that was critical of the GOP tax law.

“May all members be mindful that the institutions and structures of our great nation guarantee the opportunities that have allowed some to achieve great success, while others continue to struggle,” he prayed in November. “May their efforts these days guarantee that there are not winners and losers under new tax laws, but benefits balanced and shared by all Americans.”

Ryan defended the decision to ask Conroy to resign last week saying it was not about politics.

“This was not about politics or prayers, it was about pastoral services,” he claimed. “And a number of our members felt like the pastoral services were not being adequately served, or offered."

Ryan said the decision had been "based upon feedback I've been getting for quite a while from members."

Fr. Conroy told The New York Times that Ryan told him shortly after, “Padre, you just got to stay out of politics.”

A congressional aide for Ryan told the Times that no specific prayer was the cause of the decision.