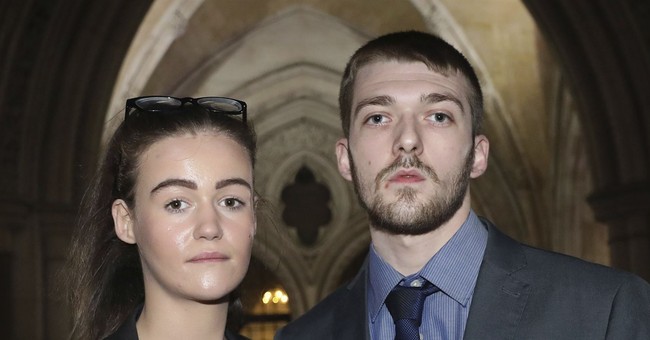 Alfie Evans, a 23-month-old with an undiagnosed degenerative brain condition, may have a second chance at being transferred to a hospital in Italy in an appeals court hearing scheduled for Wednesday afternoon. The Alder Hey hospital in Liverpool removed Alfie from life support Monday but he defied doctor’s predictions and survived six hours after which he was given some water and oxygen. A judge sided with the hospital Tuesday over the wishes of Alfie’s parents who are fighting to move him to Rome for more time and experimental treatment.

The judge ruled that Alfie could not be taken to Italy for further treatment, but that he could potentially be allowed home.

The judge dismissed claims that Alfie's was improving because he was breathing on his own.

"With little, indeed no hesitation, I reject that,” he said. “The brain cannot regenerate itself and there is virtually nothing of his brain left."

According to BBC, “during the hearing at Manchester Civil Justice Centre, he said the best Alfie's parents could hope for was to ‘explore’ the options of removing him from intensive care either to a ward, a hospice or his home.”

When announcing that they were once again appealing the decision, Alfie’s father Tom Evans said, "I'm not giving up because Alfie is breathing away. He is not suffering, he is not struggling, he is fighting.”

At one point, Alfie’s father told reporters that he’d been resuscitating Alfie when “his lips turned blue.”

“Now they are saying that he looks really good but we all know he should be in Italy right now,” he said.

Meanwhile there is a growing, international outcry over the hospital and the court’s actions in denying Alfie nourishment and life support while preventing the parents from transferring their child to Italy.

At least let his parents take him home to die, for goodness sake. He’s THEIR little boy, nobody else’s. #AlfieEvans

Let me get this straight. Alfie Evans is breathing on his own, requires no life support, is no longer being treated by the hospital, has Italian citizenship, and has been offered care in Rome. But the UK judge is forbidding him from going. Why?