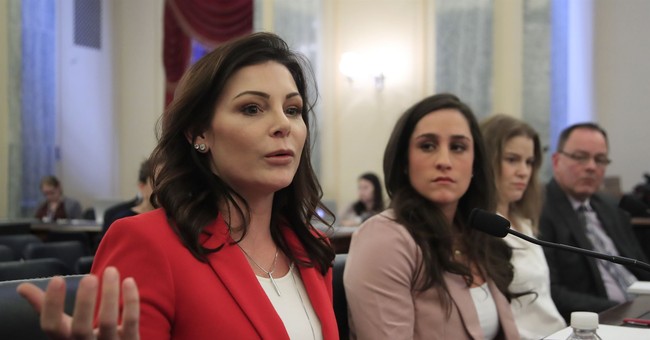 Olympic gymnasts Jordyn Wieber and Jamie Dantzscher, who have both testified that they experienced abuse at the hands of disgraced USA Gymnastics team doctor Larry Nassar, appeared before the Senate Wednesday to talk about the changes that need to happen at the U.S. Olympic Committee to protect athletes. The women both said that they were sure sexual abuse is still going on in their sport.

Dantzscher, a bronze medalist in the 2000 Olympics, was one of the first to sue Nassar over the abuse, at first anonymously, in 2016. She told the Senate that the abuse occurred because USAG and the USOC "kept Larry Nassar's secret, they failed to speak up and they let Nassar assault children."

Wieber, a gold medalist on the 2012 Olympic team, said she and the other girls were betrayed by USA Gymnastics and the USOC. She said she was abused by Nassar starting at the age of 14 and that he was allowed to flourish in the training environment of USA Gymnastics. Wieber said she discussed it with her teammates McKayla Maroney and Aly Raisman who all disliked and were confused by Nassar’s treatments. All three have since publicly testified against Nassar.

“Do you think this kind of abuse is still going on?” Sen. Richard Blumenthal (D-CT) asked the Olympic athletes.

“Yes, I know for sure it’s still going on,” Dantzscher replied, “when you have the organizing, you know USA Gymnastics is the governing body that’s the leadership and that’s how they decided to lead, that’s going to trickle down and be a failed system completely.”

“I definitely think there need to be policies that change like how they put their hands on us, when, and there’s something called body shaping that’s just so normal,” she said, “there was times Larry was touching me over my leotard in the middle of the gym in Texas at the training center and everyone was there and no one thought anything of it because it seemed normal in gymnastics and you know things like that need to be changed.”

Wieber called out the lack of change in leadership when it came to the staff with the most direct access to the athletes.

“With USA Gymnastics obviously, the board of directors all resigned but the people who are on the national team staff or in charge of the training camps every month, the ones who have the most interaction with the athletes, they’re still there,” she emphasized, “it’s the same people in charge and I don’t think that they’re innocent at all. I think that they’ve seen things and haven’t said anything or they knew things at one point and didn’t do the right thing and I feel like there needs to be an entirely new staff in order for this to stop.”

USAG responded with a statement that it “is committed to creating a culture that empowers and supports our athletes and focuses on our highest priority, which is the safety and well-being of our athletes. We hope everything we do going forward makes this very clear.”

Nassar was sentenced to up to 175 years in prison on charges of sexual assault and child pornography. He has been accused of abusing over 260 athletes during his time with MSU and USAG.