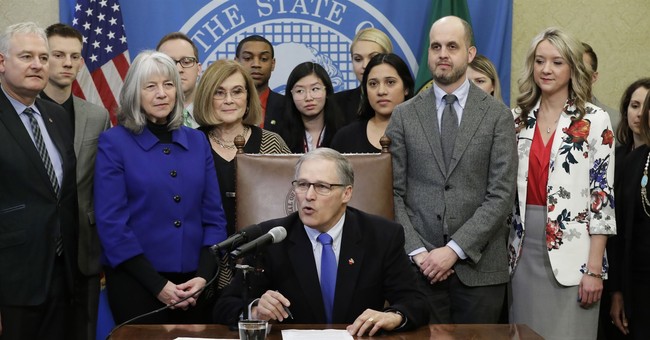 Washington State Gov. Jay Inslee (D) signed a bill into law Wednesday that requires the state’s insurers who cover maternity care to also cover elective abortions and contraception. The measure has no religious or moral exemptions and is likely to face legal challenges.

The bill, dubbed the Reproductive Parity Act by its supporters, also requires health plans issued or renewed after Jan. 1, 2019, to provide free coverage for all contraceptive drugs, devices, and voluntary sterilizations.

At the bill’s signing, Inslee said it would "make sure that women have access to the full spectrum of healthcare they need without cost barriers or stigma.”

"Reproductive healthcare, including family planning and abortion, is healthcare," he added.

From reproductive parity in health care to equal pay to ensuring we're standing with anyone who says "Me Too," today's bill signing was all about protecting the rights of women in our state. #waleg pic.twitter.com/yUoKFSEffU

The bill had the support of abortion groups such as Planned Parenthood and NARAL.

However, religious groups and Republicans in the state legislature have expressed serious concern that the bill violates religious freedom rights for many in the state.

“The sincerely held religious beliefs of a vast majority of this state are being violated by this bill,” State Rep. Matt Shea (R) said.