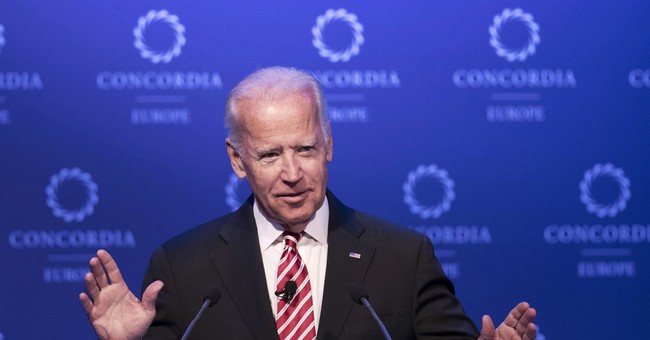 Former Vice President Joe Biden escalated his rhetoric against President Trump in an address to students at the University of Miami Tuesday. Biden said he would have “beat the hell out of” Trump in high school over remarks like the ones in the Access Hollywood tape.

"A guy who ended up becoming our national leader said, 'I can grab a woman anywhere and she likes it,'" Biden said at an “It’s On Us Rally” to combat sexual assualt. "They asked me if I’d like to debate this gentleman, and I said 'no.' I said, 'If we were in high school, I’d take him behind the gym and beat the hell out of him.'"

"I've been in a lot of locker rooms my whole life," Biden added. "I'm a pretty damn good athlete. Any guy that talked that way was usually the fattest, ugliest S.O.B. in the room."

The former vice president made similar remarks on the campaign trail for Hillary Clinton in 2016 saying that “if he were in high school” with Trump he would “take him behind the gym.”

Biden has been an outspoken critic of President Trump and recently called him a “joke” who’s doing “everything Putin ever wanted.”

Biden also commended the MeToo movement at the rally, but added that there was still a lot of work to be done and encouraged women to inform themselves of resources to combat sexual assault on campuses.

"It's not just on the men. It's on you women, as well, on campus," Biden said. "All the studies show that 95 percent of young women who are abused -- the first person they tell is their roommate, their friend, someone on campus. You've got to inform yourself as to what facilities are available, what help is available, not just empathize, hug and say, 'I'm so sorry.' You have an obligation to be informed."