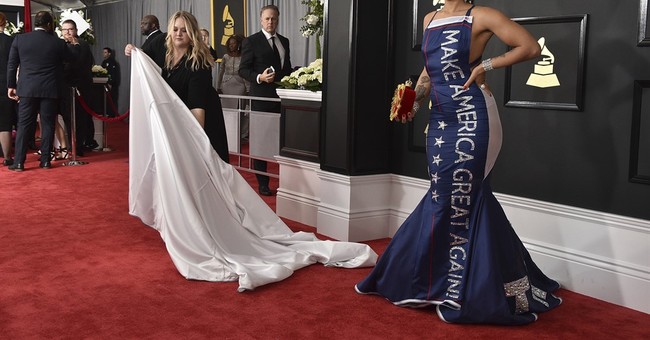 Oxon Hill, MD – Singer-songwriter Joy Villa turned quite a few heads at the Conservative Political Action Conference (CPAC) Friday wearing an Uncle Sam sweater and a long, flowing outfit heavy on reds, whites, and blues. As she sat down with Townhall over some tea backstage it became clear that she is not afraid to make a statement, particularly a political statement through fashion.

“It’s funny,” she added, “because I didn’t expect what happened after, you know my album went to number one on iTunes, Amazon, and Billboard. I gained millions of new fans.”

She called that dress and her head-turning pro-life dress at the 2018 Grammy’s things she chose to wear due to “a personal connection” for her.

In the case of the Make America Great Again dress, Villa explained, “I voted for Trump, I’m proudly pro-Trump in an atmosphere where nobody really is in Hollywood and I was ashamed to see so many of my fellow Americans hating on our president.”

“I didn’t like a lot of sitting presidents but I’m not going to say I want to burn down the White House like Madonna did,” she continued. “I don’t feel like it’s right to be so hateful and the vitriol was disgusting so I said I’m going to combat with love and I’m going to combat that with support and beauty and elegance and style and fashions.”

She said the dress was her “way of showing support for the president and showing support for my belief system and saying I’m not afraid to be who I am and come what may I’m an independent artist so what are they going to do? Fire me? They can’t, they don’t own me.”

Her pro-life dress at the 2018 Grammy’s featured an unborn baby in utero and a bag with the message “Choose Life.” That dress has an even deeper personal connection for Villa, one she’s written about in the past.

“My pro-life dress was because I gave a baby up for adoption after being in a crisis pregnancy ten years ago and it was an abusive relationship,” she said.

“My boyfriend at the time he was on drugs and I was absolutely heartbroken and I went to get pregnancy tested and the nurse told me: you need to get an abortion, you know, you really should get an abortion that’s the best thing for you, you’re too young to have a child,” Villa recounted.

After the nurse told her she was too young to have a child at 19 and that she herself had had three abortions, Villa said it felt like the nurse had made the choice for her.

“So I said no, I’m not going to do that, I walked away crying, sad, alone and I found the option of adoption,” she said, “and it’s an open adoption so I see her, I know her, she calls me Mama Joy and I’m a mother today because of this and it’s life and celebrating life and celebrating the human aspect that God created us to live and be beautiful and to spread love and joy and compassion for each other.”

Villa said that with her pro-life statement at the Grammy’s she was looking to highlight the beauty of that option of adoption and of life.

She called adoption “simple, it’s not easy, but it is the solution that I really hope by sharing my story and by coming out at the Grammy’s and being proudly pro-life that other women will see that and make the right decision.”

Villa, who recently filed a sexual assault complaint against former Trump campaign manager Corey Lewandowski over his behavior at a Christmas party, weighed in on the #MeToo movement in Hollywood.

“There should be no shame for victims of sexual abuse,” she emphasized, asking, “If someone broke into your house, no one would blame you, no one would say well what were you wearing?”

Villa’s take on why these Hollywood scandals are finally coming to light was a bit unconventional. She attributed the start of the MeToo movement to President Trump exposing fake news and leftist hypocrisy.

“We see these scandals being uncovered,” she said, “because Hollywood has been doing it for years, it’s nothing new but no one’s been exposing it and I truly believe because Trump is in office and he’s someone who exposes fake news, who exposes the hypocrisy of the left…I really think it started something.”

“I really think that’s connected to what’s happening in Hollywood, the exposing the lies, the fake news, we’re uncovering things,” she said. “So we have this MeToo movement and women are now going: oh yeah I can be strong, I can stand up and I can take back this, you know, what has been stolen from me, so I think it’s a really good thing.”

She said that although the left calls Trump anti-woman, “he’s not anti-woman. He has so many women on staff in leadership positions, his daughter is a leader. She’s in North Korea, she is leading the delegation to multiple countries, she came back from India and she’s doing incredible things.”

She said that Ivanka encouraged her to get into politics when they last spoke at the White House. Villa has been considering a Congressional run in Florida .

Villa was clearly energized by the support she was feeling at CPAC, saying fans who had reached out with messages of support for her pro-Trump and pro-life fashion statements were the reason she was there.

She was also moved by the students at CPAC and elsewhere who face similar scrutiny in their classrooms to the scrutiny she faces in Hollywood over fashion statements.

“They’re afraid of their teachers, their teachers will flunk them if they wear a Make America Great Again hat,” she said. “Free speech is gone, we need to bring that back up and that starts with putting human values back in, putting compassion, humanity, saying that each child matters.”

Villa called Trump’s speech that day “incredible,” predicting that “the wall is going to get built” and saying Trump has “done more things for this country in one year than most presidents have done in eight.”