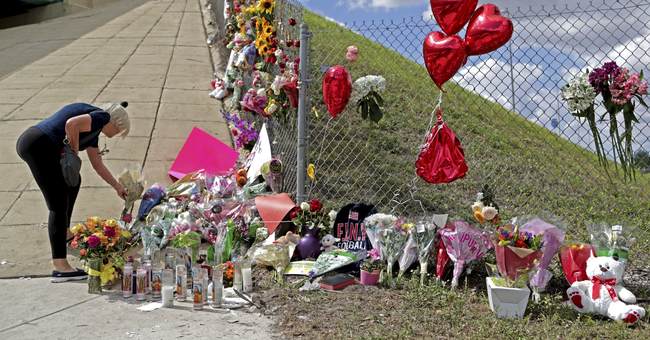 Broward County Sheriff Scott Israel visited 15-year-old Anthony Borges in the hospital Sunday. The teen was shot five times during the horrific shooting at Marjory Stoneman Douglas High School last week as he saved about 20 of his classmates by closing and attempting to lock the door to a classroom.

The Sheriff was honored to visit Anthony Borges,15, in the hospital. Anthony was shot five times. Fortunately, he is recovering, but has a long road ahead with more surgeries needed. Please join us in praying for the swift recovery of Anthony and all others from #StonemanDouglas. pic.twitter.com/U0PVkEwpFZ

Carlos Rodriguez, a fellow student,told “Good Morning America” that Borges saved him and many others when the shooting began.

“None of us knew what to do,” Rodriguez said. “So, he took the initiative to just save his other classmates.”

He said Borges was the last of 20 students to run into a classroom and while Borges tried to lock the door to protect the other students he was shot repeteadly. No one else in the classroom was hurt.

Anthony’s dad, Royer Borges related the chilling call he received from his son.

"He just called me and says, 'Dad, somebody shot me in the back and my leg, too,'" he said.

Borges was very proud of his son’s actions. "He's my hero," Borges said.

"I only ask that people pray for him," he added.

Sheriff Israel verified a Gofundme account for Anthony Borges on Twitter to help in his long road to recovery as he will be requiring more surgeries. The account has raised $219,573 so far.