Florida Gov. Rick Scott Says He Will Work to Keep Guns Away From Those with Mental Illness 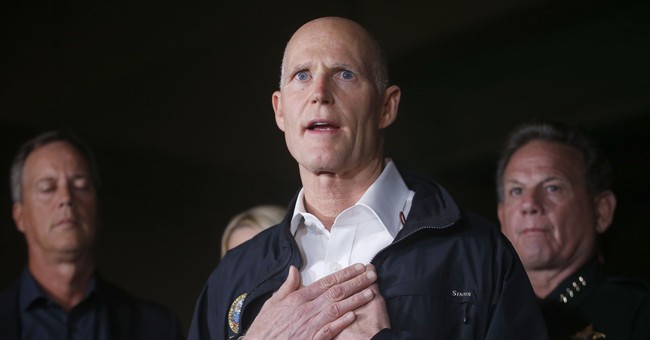 Florida officials updated the press Thursday about the situation after 19-year-old Nikolas Cruz opened fire Wednesday in his former high school in Parkland, Florida and was taken into custody. Cruz has been charged with 17 counts of premeditated murder, the authorities said.

Florida Governor Rick Scott (R) said he would work towards making sure that someone with mental illness is not able to access guns and ensuring that this “never happens again.”

Broward County Sheriff Scott Israel asked lawmakers to “go back to places like Tallahassee and Washington, D.C., to give police the power," to detain people for making threats or posting disturbing material online, and require them to be examined by mental health professionals.

Authorities confirmed there was an armed officer at the high school at the time of the deadly shooting, but Sheriff Israel said that the officer did not encounter the suspect during the attack.

Sheriff Israel also took a moment to praise hero coach Aaron Feis who he confirmed was among the casualties. Feis, an assistant football coach, died as he was physically shielding students from the shooter.

FBI agent Rob Lasky addressed questions regarding reports that a YouTube user reported a 2017 comment by Cruz saying, "I'm going to be a professional school shooter."

"We have gotten to all of the victims who have lost loved ones to be sure we can help pay for their funeral expenses," Florida Attorney General Pam Bondi told reporters. She also said the state would be covering counseling for survivors and encouraged donations to the official GoFundMe account for victims and families.