Pelosi Continues to Insist: GOP Tax Bill a 'Dark Cloud that Hangs Over the Capitol' 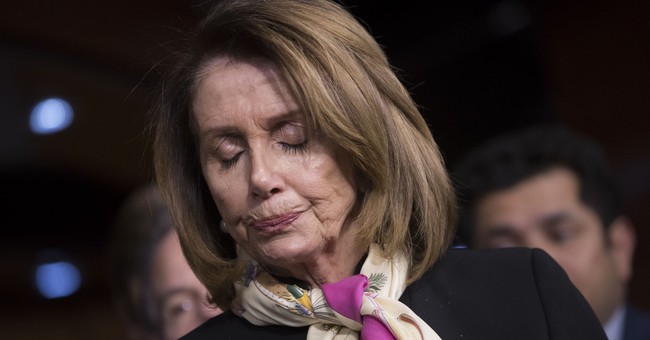 House Minority Leader Nancy Pelosi (D-CA) doubled down Monday afternoon on her dire remarks about the GOP tax reform bill, despite the many companies who are providing bonuses to their employees as a result of the legislation.

"The tax bill is really the dark cloud that hangs over the Capitol," Pelosi told the Washington Post’s Karen Tumulty. "They sell it as middle class tax cuts, 86 million American middle class families will be paying more in taxes as a result of this bill."

Pelosi was responding to the question of what “keeps up her at night.”

She was also asked about her use of the words “crumbs” in relation to the $1,000 bonuses many workers are receiving.

"Crumbs, goodies. Either one," Pelosi said of her terminology. "Because it's not a question of $1,000, it's a question of the billions of dollars, the banquet that they have put for the top 1 percent."

"This is unconscionable that they would have 83 percent of the benefits going to the top 1 percent,” she claimed. “So that's not my point is it's not what it is, it's what it isn't and what it is for the banquet of money at the top and extraction of money, but trying to sell it as something that you should just be so glad to get. No, our people deserve better."

In the past, Pelosi has referred to the tax reform package as “Frankenstein” and “Armageddon.”

A growing list of companies have announced bonuses, wage hikes, and 401(K) match increases due to the tax bill. These companies include Disney, Starbucks, Verizon and JP Morgan Chase.