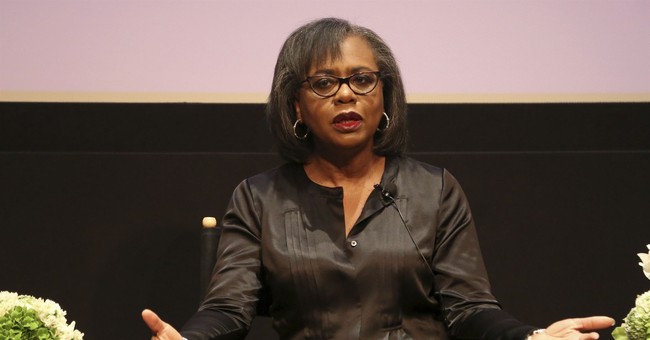 “Anita Hill is not the answer to ending sexual misconduct in Hollywood,” Nance said in a statement. “When Ms. Hill had the opportunity to step up and defend the powerless against President Bill Clinton’s sexual misconduct, her instinct was to defend him because his politics happened to be liberal.”

“Every woman in Hollywood understands that their town is replete with countless powerful men whose politics just happen to be liberal,” she added. “It doesn’t take a great intellectual leap to posit this is why, in all their insecurity (and condescension), the Hollywood moguls picked her to lead the commission in the first place. If these leaders truly care about the women in their industry they’ll find someone way better to lead this effort than Anita Hill.”

Anita Hill defended Clinton in a 1998 “Meet the Press” interview with Tim Russert just a couple of months after the Lewinsky scandal broke. He asked her about a Gloria Steinem opinion piece in which Steinem argued that Clinton was not expendable due to his work advancing feminist policies.

“I think Ms. Steinem also says that we have to look at the totality of the presidency and how has he been on women’s issues generally,” Hill said at the time. “Is he our best bet, not withstanding some behavior that we might dislike? And I don’t think that most women have come to the point where we have said, ‘Well, this is so bad that even if he is better on the bigger issues, we can’t have him as president.'”

During the interview, Hill also dismissed Paula Jones’s sexual harassment allegations against Clinton, saying she has “a hard time finding any adverse ramifications for her, in terms of her employment, based on the alleged incident in the hotel room.”

Kennedy, in a statement, said the Commission on Sexual Harassment and Advancing Equality in the Workplace “will not seek just one solution, but a comprehensive strategy to address the complex and interrelated causes of the problems of parity and power.”

“It is time to end the culture of silence,” said Hill, in a statement about the commission. “I’ve been at this work for 26 years. This moment presents us with an unprecedented opportunity to make real change.”