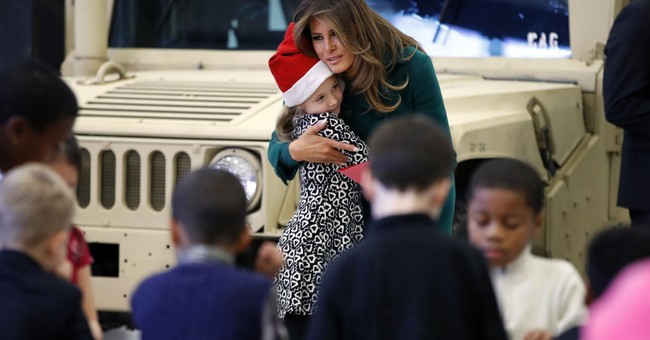 A majority of Americans now view Melania Trump favorably, according to Gallup, as her first year as First Lady comes to a close. Her favorable rating has risen to 54 percent, up 17 percentage points since January.

When President Trump took office at the beginning of the year, 37 percent of Americans viewed Melania Trump unfavorably, 37 percent viewed her favorably, and 26 percent said they hadn’t formed an opinion of her yet.

Gallup asked the question again at the beginning of December and the first lady’s unfavorable rating has dropped to 33 percent while those with no opinion of her are just 13 percent.

Melania's favorability rating is now higher than her husband's 41 percent favorability which, according to Gallup, is consistent with "findings that recent first ladies are, on average, more popular than their husbands."

While the general public’s favorable view of Melania is rising, some in the media have taken to criticizing her for her choice in footwear, panicking when she got on a plane to visit Hurricane Harvey victims in Texas wearing stilettos despite the fact that she changed into sneakers before arriving.

Her White House Christmas decorations were also recently criticized by some in the media as well as her “rigid pose” when watching ballerinas perform during preparation for Christmas festivities.

One area in which it seems most can agree is Melania’s fashion diplomacy, the first lady has been widely praised for her travel wardrobe during visits to Paris and China.

Results for the Gallup poll were “based on telephone interviews conducted Dec. 4-11, 2017, with a random sample of 1,049 adults, aged 18 and older, living in all 50 U.S. states and the District of Columbia.”

Leah Barkoukis
House Republicans Have a Plan to End Federal Vaccine Mandates
Leah Barkoukis
Could Redrawn Districts Mean a Republican Has a Chance in Illinois? There's a Candidate Hoping to Make It So
Rebecca Downs

Americans Notice a Very Problematic Part About Those 'Free' Covid Tests the Government Is Sending Out
Townhall
'Trump has this wrong': Some of the former president's biggest supporters are not happy with his endorsement in Tennessee's 5th congressional district
Twitchy
The Biden Administration Signals That Florida Belongs to the Republicans Now
Redstate
The Morning Briefing: Like a Hobo's Bad Foot Odor, Pelosi Is Sticking Around
PJ Media