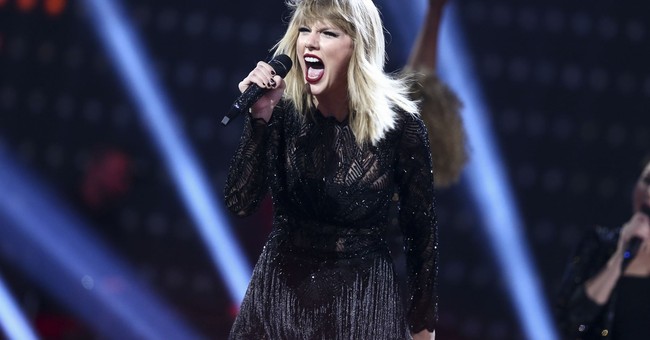 The American Civil Liberties Union (ACLU) started some bad blood Monday with pop star Taylor Swift and her attorney over what the ACLU believes to be a meritless claim of defamation against a writer who tried to link Swift to white supremacists. The ACLU argues that Swift’s attorneys are trying to “suppress constitutionally protected speech” by accusing PopFront editor Meghan Herning of defamation in a September article in which she compared Taylor Swift to neo-Nazis and even Adolf Hitler.

Herning’s article “Swiftly to the alt-right: Taylor subtly gets the lower case kkk in formation,” made some rather outlandish claims about Swift’s recent single “Look What You Made Me Do.”

“Taylor’s lyrics in ‘Look What You Made Me Do’ seem to play to the same subtle, quiet white support of a racial hierarchy,” Herning claims. “Many on the alt-right see the song as part of a ‘re-awakening,’ in line with Trump’s rise. At one point in the accompanying music video, Taylor lords over an army of models from a podium, akin to what Hitler had in Nazis Germany. The similarities are uncanny and unsettling.”

But were the alleged similarities unintentional? Swift's not out of the woods in Herning's opinion.

“It is hard to believe that Taylor had no idea that the lyrics of her latest single read like a defense of white privilege and white anger — specifically, white people who feel that they are being left behind as other races and groups start to receive dignity and legally recognized rights,” Herning adds. “’We will not be replaced’ and ‘I don’t like your kingdom keys’ are not different in tone or message. Both are saying that whites feel threatened and don’t want to share their privilege. And there is no way to know for sure if Taylor is a Trump supporter or identifies with the white nationalist message, but her silence has not gone unnoticed.”

The ACLU released an October 25th letter that Herning received from Swift’s attorney threatening a lawsuit over the post arguing that it was defamatory and asking that Herning issue a retraction.

In their response letter to Swift’s attorneys, replete with puns from Swift’s song lyrics, the ACLU argued that Herning’s post was a statement of opinion that is protected by the First Amendment.

“The statements on the blog are protected by the First Amendment unless they are demonstrably false and you can show that the author made them knowing that they were false or with reckless disregard as to whether they were false,” the ACLU writes. “Equally important, a statement of opinion—meaning one that is ‘not capable of being proved true or false’—cannot constitute defamation.”

So while Herning's article may have been mean, it doesn't necessarily constitute defamation.

“The post’s interpretation of ‘the lyrics [of “Look What You Made Me Do”]’ as ‘the most explicit in speaking to white anger and affirming white supremacy’ is also pure opinion,” they argue and add that “comparisons to Hitler are offensive, but they are not defamatory because they inevitably are opinions.”

“Criticism is never pleasant, but a celebrity has to shake it off, even if the critique may damage her reputation,” they write.

“Intimidation tactics like these are unacceptable,” said ACLU attorney Matt Cagle. “Not in her wildest dreams can Ms. Swift use copyright law to suppress this exposure of a threat to constitutionally protected speech.”

The ACLU concludes with their own ultimatum asking Swift’s attorneys to get back to them by November 13th about whether they will proceed with litigation.