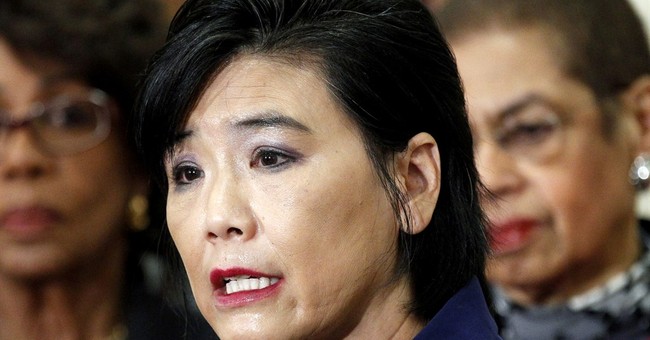 Rep. Judy Chu (D-CA) questioned Tom Barthold, an economist and the chief of staff for the Joint Committee on Taxation, Monday about a portion of the tax reform bill that allows expectant parents to start a 529 college savings fund for their unborn baby. She called the bill’s reference to unborn children “dangerous.”

“Nothing shall prevent an unborn child from being treated as a designated beneficiary,” according to the bill. It defines an unborn child as a “child in utero” which “means a member of the species homo sapiens, at any stage of development, who is carried in the womb.”

“If this kind of dangerous language starts appearing in other places in federal law it could have far-reaching implications on women’s health,” she claimed, “but ultimately the inclusion of this language is yet another Republican attempt to block a woman’s constitutional right to abortion but this time in the guise of changing our tax code.”

“This language has nothing to do with college savings accounts,” she insisted. “Instead this is an attempt by anti-abortion activists to redefine personhood but in the tax code.”

Rep. Chu emphasized that the only other places she’s seen the term “unborn child” in the entirety of federal statute was in the 2004 Unborn Victims of Violence Act and in 2016 laws relating to emergency medical procedures for pregnant women.

The 2004 law Chu referenced states that people who commit certain federal crimes and thereby “cause the death of, or bodily injury to, a child who is in utero shall be guilty of a separate offense,” the punishment for which “be the same as provided under Federal law for that conduct had that injury or death occurred to the unborn child's mother.”

Planned Parenthood, the nation’s largest abortion provider, and NARAL tweeted agreement with Chu’s concerns about the language of unborn children in the tax code.

Yes, that's right - Republicans are even trying to sneak extremist anti-choice language into the #GOPTaxBill. Thank you @RepJudyChu! https://t.co/atUF7EGEUN

Lawmakers have no business attacking safe, legal abortion — but especially not in a tax bill. #WeWontGoBack https://t.co/8lVCayw6c8

Pro-life advocates praised the language when it was initially unveiled Thursday, something Chu cited in her questioning as one of the reasons for her concern over it.

March for Life President Jeanne Mancini said, “House Ways and Means Chairman Kevin Brady (R-Texas) deserves praise for including language in this tax bill that recognizes the personhood of unborn children by allowing expectant parents to contribute to their child’s 529 education savings account in the year prior to birth.”

“A child in the womb is just as human as you or I yet, until now, the U.S. tax code has failed to acknowledge the unborn child - all while granting tax breaks for those seeking an abortion under the pretense of ‘healthcare’,” she said. “The proposed tax plan is a huge leap forward for an antiquated tax code, and we hope this is the first step in expanding the child tax credit to include unborn children as well.”

Mallory Quigley, communications director for the Susan B. Anthony List called the language, "a small increment in the momentum that we're building to ensure that one day every child is welcomed and protected under the law."