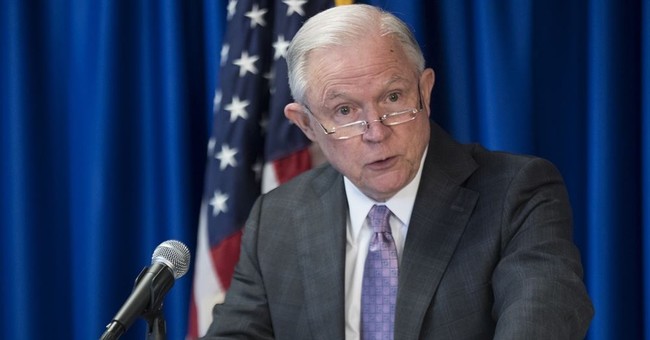 Attorney General Jeff Sessions spoke Thursday at the Heritage Foundation about federal judges who “have failed to respect our representatives in Congress and failed to appropriately respect the prerogatives and perspectives of the executive branch.” He referenced judges who issued orders blocking Trump’s travel restrictions reminding those gathered that “the Constitution gives judges no right to veto a president’s actions because they disagree with him on policy grounds.”

"The court said the government 'can't come into court to espouse a position that is heartless,” Sessions said. “He didn’t say it was unlawful. He said, 'I don't like your policy.'"

"A judge’s comments on policy like this is offensive, and it’s disrespectful of the legislative and executive branches and to the fine attorneys in the Department of Justice,” he added. “The Judiciary is not a superior or policy-setting branch. It is co-equal. Those who ignore this duty and follow their own policy views erode the rule of law and create bad precedents and, importantly, undermine the public respect necessary for the courts to function properly.”

“This is especially problematic,” Sessions said, “when district courts take the dramatic step of issuing activist nationwide injunctions—orders that block the entire United States government from enforcing a statute or a presidential policy nationwide.”

“Scholars have not found a single example of any judge issuing this type of extreme remedy before the 1960s,” he pointed out. “But today, more and more judges are issuing these lawless nationwide injunctions and in effect single judges are making themselves super-legislators for the entire United States. We have nearly 600 federal district judges in the United States—each with the ability to issue one of these overreaching nationwide orders.”

Sessions said that this “makes the need for judges to stick to the law even more important. A single judge’s decision to enjoin the entire federal government from acting is an extreme step, and too often, district courts are doing it without following the law.”

Sessions closed his speech on a “more optimistic note” touting the fact that “Numerous judges—and two district courts—upheld the President’s Executive Order temporarily suspending immigration from certain countries. And the Supreme Court has now vacated both of the appellate court rulings against us.”

“The Second Circuit also just issued a favorable ruling in a case challenging the wind-down of the DACA program,” he continued. “Although some district courts may initially rule against us, I am confident that our positions will be vindicated in the court of appeals and, if necessary, in the Supreme Court. Because we are right.”