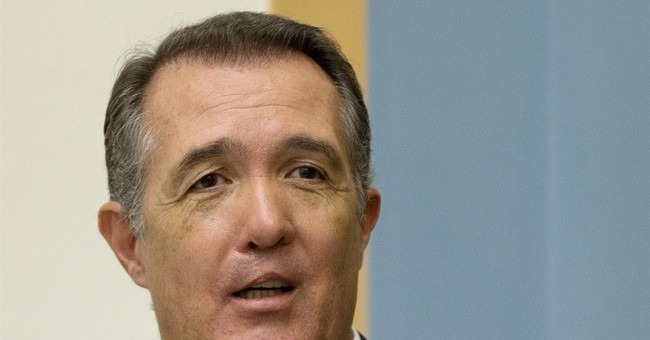 Rep. Trent Franks (R-AZ) praised the Health and Human Services' strategic plan Tuesday which says that "HHS accomplishes its mission through programs and initiatives that cover a wide spectrum of activities, serving and protecting Americans at every stage of life, beginning at conception."

“It is vital our government’s definitions of terms correspond to reality,” Rep. Franks said of the new language. “Therefore, I applaud the Trump Health and Human Services’s new strategic plan that defines life as beginning at conception, which any average high school biology student knows to be true.”

Franks also pointed out that “the Left has not successfully been able to redefine when life begins.”

“Their claim is that a fetus becomes a life worth protecting at the moment he or she passes through the birth canal and sometimes not even then,” he said. “Personhood, the line of argument continues, is conferred by the mother when she decides she wants to keep her child. This is a dangerous line of thinking that could lead to the justification of ending the lives for any and all of society’s ‘undesired’ persons. What an inexpressibly dangerous and inhumane notion for Humanity to embrace.”

Planned Parenthood CEO Cecile Richards, along with countless other abortion advocates including Hillary Clinton, have made the argument that it’s really the woman’s choice when they have been asked about when life begins.

Cecile Richards was once asked by Jorge Ramos “For you, when does life start? When does a human being become a human being?”

"It is not something that I feel like is really part of this conversation,” she replied. “I think every woman needs to make her own decision.”

“I'm the mother of three children,” she added. “For me, life began when I delivered them.”

Hillary Clinton confusingly referred to the “unborn person” on the campaign trail last year saying, "the unborn person doesn't have constitutional rights. Now, that doesn't mean that we don't do everything we possibly can in the vast majority of instances to, you know, help a mother who is carrying a child and wants to make sure that child will be healthy, to have appropriate medical support.”

"It doesn't mean that you don't do everything possible to try to fulfill your obligations. But it does not include sacrificing the woman's right to make decisions," Clinton said.

Franks, the co-chair of the pro-life caucus, said “reality’s definition of life is different. Reality reveals the unborn child is alive at conception, for it will grow into an adult human through a natural course. Life begins when that course begins. A life, a wonderful and mysterious gift, deserves protecting at its earliest stages, just as it does in its later stages.”

“The role of government is to protect innocent human life in that human course,” he concluded. “HHS’s inclusion of the correct definition of life pursues that noble goal.”

Each life is a gift from God. Encouraged to see @HHS recognize that life begins at conception. https://t.co/Gx0iweVvNe

The abortion advocacy group NARAL was significantly less thrilled with the definition, calling it “extremist.”

?? WOW. HHS is pushing an extremist anti-choice policy that would ban abortion and some forms of birth control: https://t.co/5n6iaAjI3C