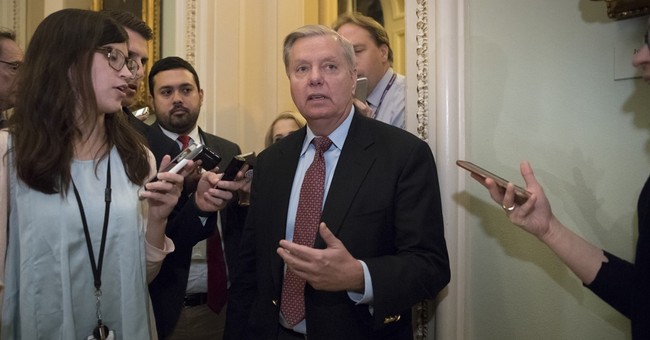 Sen. Lindsey Graham (R-S.C.) introduced the Pain Capable Unborn Child Protection Act in the Senate Thursday flanked by his Republican colleagues and pro-life leaders. The legislation would ban abortion at 20 weeks of pregnancy, the point at which science increasingly shows that unborn children feel pain. The bill passed the House Tuesday by a vote of 237-189.

Sen. Graham opened by highlighting the “new theory” behind this bill. He said that “the theory of the case here is pretty important, under Roe v. Wade, there’s a state interest when the fetus becomes viable. Viability has definitely changed since 1973.” Roe v. Wade defined viability at anywhere from 24-28 weeks based on the medical consensus at the time.

Given that Micah Pickering, a now five-year-old boy born at 20 weeks of pregnancy, was obviously “viable” since he did survive and was able to advocate for the bill in person last week, it seems a reasonable proposition that the concept of “viability” should be revisited.

Based on Micah’s case and others, The New York Times wrote in 2015, that a “study, of thousands of premature births, found that a tiny minority of babies born at 22 weeks who were medically treated survived with few health problems, although the vast majority died or suffered serious health issues. Leading medical groups had already been discussing whether to lower the consensus on the age of viability, now cited by most medical experts as 24 weeks.”

“It’s not much of a leap,” he said, “to say that an abortion would be a very painful thing for that child to go through so we’re trying to convince the courts that legislative bodies like the Congress and at the state level have a legitimate, compelling state interest to protect a child in the fifth month of development from excruciating pain that would come from an abortion.”

Graham also emphasized that 20 states have already passed a version of this legislation.

Despite the uphill battle the legislation faces in the Senate, requiring 60 votes to pass while Republicans only hold 52 seats, Graham said he expects the bill "to pass with 60 votes over the arc of time as we persuade more and more Americans.”

Sen. Joni Ernst (R-IA) spoke passionately on behalf of the bill reminding everyone that “we know that at five months of gestational age babies have ten fingers, they have ten toes, they can make faces, they can yawn, and we also know that they feel pain.”

“It’s unconscionable that the United States is one of only seven countries that allows abortions after five months,” she added. “We are currently in the company of countries like China and North Korea, not good company in many ways.”

Ernst says she’s fighting for the legislation in honor of her “very small friend and fellow Iowan, Micah Pickering.”

“This legislation can protect up to 10,000 lives like Micah’s every year by preventing abortions after about 5 months of development and it is absolutely critical that the Senate take up legislation to protect our most vulnerable in our population,” she emphasized.

Sen. James Lankford (R-OK) called the legislation “very straightforward” saying it was “an opportunity for us to be able to catch up for the rest of the world, where the rest of the world has already gone, recognizing a child at the fifth month of development is a viable child. When you look across Europe, Europe has already changed their laws, with the exception of the Netherlands…they do not allow elective abortions after the fifth month.”

She cited Dr. Kanwaljeet Anand, a professor of pediatrics, anesthesiology and neurobiology at the University of Tennessee’s Health Science Center, who said in a ten-page report, “it is my opinion that the human fetus possesses the ability to experience pain from 20 weeks of gestation, if not earlier, and the pain perceived by a fetus is possibly more intense than that perceived by term newborns or older children.”

Anand told the New York Times in 2013 that he did not like the politicization of his research or the attempts to apply it to the abortion issue, however, in that same interview he also said that in abortions after 20 weeks “where fetal pain could possibly occur…consider what can be done to avoid inflicting a lot of pain on the fetus.”

He suggested a common method used after 20 weeks — injecting amniotic fluid or fetuses with heart-stopping medication before removing the fetus — “would be fine, really, from a point of view of fetal pain,” a “compassionate way to do it.” He added that if injections could not be done, he would recommend “some sort of fetal anesthesia.”

Tobias also cited Dr. Colleen Malloy of Northwestern University who recently testified that “there is ample, biologic, physiologic, hormonal, and behaviorial evidence for fetal and neonatal pain. Many authors have substantiated that fetal pain receptors are present and linked by no later than 20 weeks post-fertilization.”

“Advocates of abortion try to deny that unborn children killed in late abortions feel pain,” Tobias concluded, “but they are the ones dabbling in junk science.”