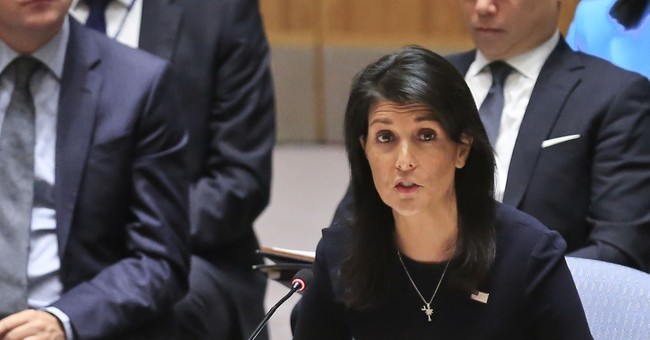 “This is a way of like getting people to talk about [Kim],” Haley told ABC’s George Stephanopoulos on “Good Morning America.”

“It worked,” she laughed. “I was talking to a president of an African country yesterday and he actually cited 'Rocket Man' back to me.”

“Every other international community is now referring to him as ‘Rocket man,’” she added.

Haley said the U.S. has “exhausted every diplomatic means in dealing with North Korea and that they “are going to continue to do that. While he is being irresponsible, we’re going to be responsible but we’ve tried to do dialogue, we’ve now tried to do sanctions.”

"The international community actually very much appreciated the blunt, honest approach that the president took on North Korea as well as Iran," Haley emphasized.

"I think what you saw was the president responding to North Korea's ballistic missile testing, their nuclear bomb test and their threats that they're going to reduce the United States to ashes, as well as destroy Japan," Haley told the TODAY show. "So what you saw was a very firm response to the Kim regime that they need to back off, and (Trump) had the entire international community with him."

White House Press Secretary Sarah Huckabee Sanders praised Trump’s use of “Rocket Man” in his speech as well, telling Fox it was “a President Trump original. As you know, he’s a master in branding.”

“This is a problem that we’ve been dealing with for 20 years,” she said of North Korea. “And Americans wanted somebody, a strong leader, somebody who wasn't going to put up with it anymore. That's one of the reasons I think Donald Trump won. They saw strength.”