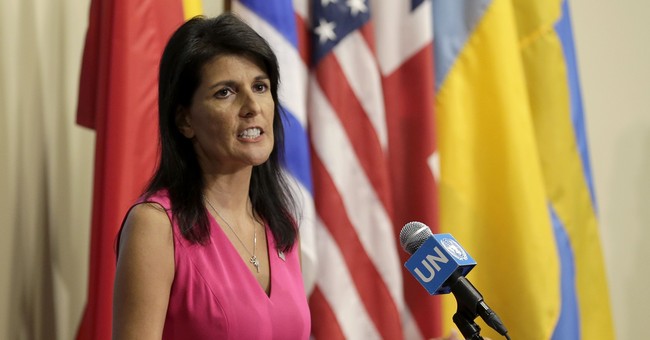 “If inspections of Iranian military sites are ‘merely a dream,’ as Iran says, then Iranian compliance with the JCPOA is also a dream,” Ambassador Haley said.

According to the nuclear deal the UN's International Atomic Energy Agency (IAEA) is “permitted to seek access to any location in Iran, including military-affiliated sites, where the IAEA has questions about possible nuclear-related activities.”

“If the IAEA were to seek access to Iranian military sites to verify Iran’s nuclear declaration, Iran must follow the unambiguous access provisions of its IAEA safeguards agreement, the Additional Protocol, and the JCPOA,” according to Haley’s statement.

However, despite pressure from the U.S., UN nuclear inspectors do not feel it is necessary to inspect Iran’s military sites, according to Reuters. The UN’s nuclear watchdog released a report claiming Iran was in compliance with the deal despite the country’s refusal to allow inspection of their military sites.

Haley also slammed the announcement by the terrorist group Hamas that it had restored relations with Iran and was receiving financial and military aid from Tehran.

“Under UN Security Council Resolution 2231, Iran is prohibited from exporting any and all arms absent Security Council approval. That same UNSCR 2231 embraced the JCPOA, the nuclear deal with Iran,” Haley's statement points out.

“Once again, Iran is showing its true colors,” she said. “Iran must decide whether it wants to be a member of the community of nations that can be expected to take its international obligations seriously or whether it wants to be the leader of a jihadist terrorist movement. It cannot be both. It’s long past time for the international community to hold Iran to the same standard that all countries who actually value peace and security are held to.”