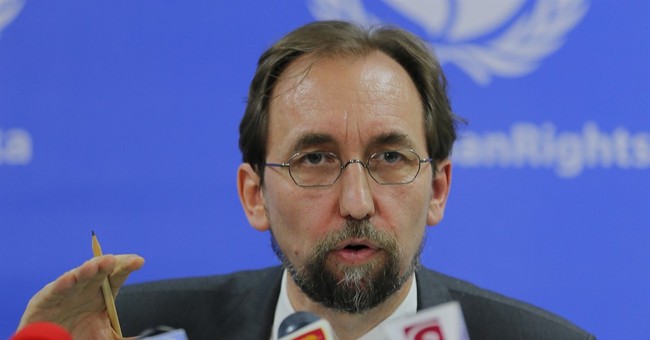 "To call these news organizations 'fake' does tremendous damage and to refer to individual journalists in this way,” he said, “I have to ask the question, is this not an incitement for others to attack journalists?”

"And let's assume a journalist is harmed from one of these organizations, does the president not bear responsibility for this, for having fanned this?" Zeid asked reporters in a Geneva press conference.

"I believe it could amount to incitement," he said, claiming Trump has started a cycle that includes "incitement, fear, self-censorship and violence."

"The demonisation of the press is poisonous because it has consequences elsewhere," Zeid added.

White House Press Secretary Sarah Huckabee Sanders replied to the remarks in a statement to the New York Times.

“We believe in free press and think it is an important part of our democracy, but the press also has a big responsibility to the American people to be truthful," she wrote. "Their job is to report the news, not create it.”

“Is it not ‘dangerous’ for the media,” she asked, “to create false narratives and overzealous attacks against the president that the American people chose to be their leader? The president is focused on growing our economy, creating jobs, securing our border and protecting Americans. Since those are also the priorities of most Americans, hopefully the media will make covering them theirs.”

The human rights chief also commented on the violence in Charlottesville calling it “an abomination” and “a nightmare.”

A UN panel recently rebuked the U.S. over the violence in Charlottesville.

Rebukes by the UN may be taken with a grain of salt, however, given that the organization elected Saudi Arabia to its Commission on the Status of Women in April despite the country’s oppressive laws restricting women from driving. Women are also not allowed to travel without being accompanied by a male.

This same UN commission last year condemned only Israel, where women are allowed to drive and travel alone, for violating women’s rights.

The UN has also come under fire recently for their blacklist of companies that do business with Israeli settlements.