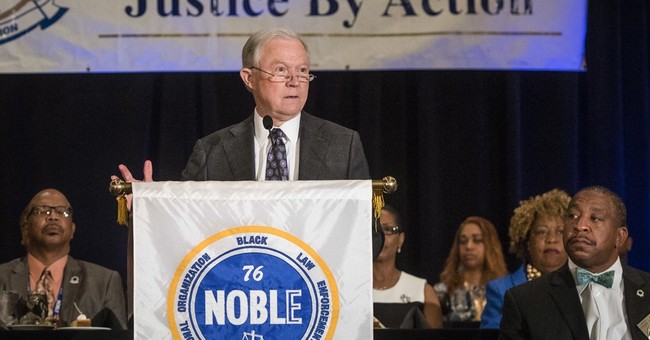 Attorney General Jeff Sessions addressed the National Organization of Black Law Enforcement Executives (NOBLE) at their annual training conference Tuesday telling them they were “crucial ambassadors to some of the communities that trust law enforcement the least.”

Sessions cited recent Gallup polling in his speech that overall confidence in the police has risen to 57 percent this year.

“That is great news and a testament to the work you do every day,” he said, “but we also know that number doesn’t tell the whole story. Most of the country continues to hold police in high regard, but in that same poll, only 30 percent of African-Americans say that they have confidence in police.

“In the last three years, that number has dropped by five points,” he added. “That means African-Americans have the least trust in police of any group in the United States.”

“We all know the cases of the last several years where, in confrontations with police, lives have been cut short,” he said emphasizing, “just as I am committed to defending law enforcement who use deadly force while lawfully engaged in their work, I will also hold any officer responsible breaking the law.

“You and I know that all it takes is one bad officer to destroy the reputations of so many who work day in and day out to build relationships in these communities and serve with honor and distinction.”

“It’s not our privileged communities that suffer the most from crime and violence,” Sessions went on to point out. “Nothing is more damaging to a struggling community than high crime rates. The first and most important job of this government—and any government—is to protect the safety and the rights of its citizens; the first civil right is that to be alive. If we fail at this task, then every other government initiative loses its importance.”

“We need to do more,” he said. “We know that our mission depends on you, 85 percent of all law officers are state, local, and tribal. You are America’s first line of defense.”

“Last year, 66 law enforcement officers were murdered in the line of duty – an increase of 61 percent compared to 2015. And preliminary data shows that officer deaths for the first six months of the year are up another 18 percent,” he said.

He also brought up the recent tragic shooting of NYPD Officer Miosotis Familia, a mother of three, who was killed by a gunshot wound to the head through the passenger window of her car as she sat on patrol.

Sessions quoted the words of NYPD Commissioner James O’Neill at the funeral who said: “cops are regular people who believe in the possibility of making this a safer world. That’s why we run toward danger, when others run away.”

Sessions also responded to NOBLE’s leadership concerns over President Trump’s remarks Friday telling cops not to be “too nice” dealing with violent criminals.

Perry Tarrant, assistant chief of the Seattle Police Department and president of the NOBLE, said he thought comments like Trump's can detract from local police officers' efforts to build trust in their communities.

“Sessions told the group’s leaders he believes Trump made the comments in jest but that he understands the effect such comments can have and underscored the Department of Justice's commitment to protecting everyone's civil rights,” according to the Associated Press.