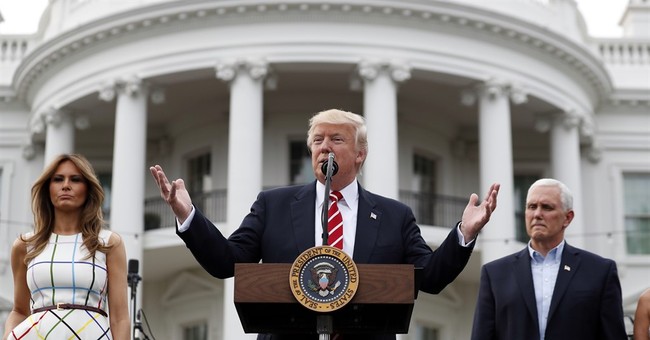 President Trump emphasized at the Congressional Picnic Thursday evening that “the outpouring of support for Steve and his family has been truly inspiring.”

.@POTUS at Congressional Picnic: "The outpouring of support for [Steve Scalise] and his family has been truly inspiring." pic.twitter.com/HBbhgu2tjA

He also said the White House was honored to host Rep. Scalise’s children, Harrison and Madison, at the picnic.

“We gave them a beautiful tour of the White House,” Trump said. “They got the A tour. You know sometimes we give the B, the C, the D, and the F tour is just like here it is let’s get out of here.”

“I want them to know that the whole country is praying for their courageous dad and all of us are praying for them,” Trump continued, on a more serious note. “It’s been amazing the recovery is going now well for two days they were saying it’s really tough but today I can report things are looking very, very good so we’re very happy about that.”

Scalise’s condition was upgraded from “serious” to “fair” Wednesday after being shot in the hip last week at the GOP baseball practice.

A tweet from Scalise’s account on Father’s day emphasized how important his children are to him, saying his “greatest joy” was being a father to Madison and Harrison and a husband to his wife, Jennifer.

Trump also praised agents Crystal Griner and David Bailey who were wounded at the practice defending the members of Congress from the gunman.

“They came rushing in from the outfield, somebody with a rifle and they had handguns and that’s not a good deal,” Trump said, “but one of those bullets struck at the right place and that was really incredible or that would have been a far worse morning.”

Trump added that he wanted to be at the Congressional baseball game on Thursday “so badly you have no idea but I spent a little time at the hospital instead with Steve.”

“It’s our hope that this unity that was displayed that evening can maybe continue to grow and thrive between Republicans and Democrats and honestly I think we’d all be doing a lot better,” he concluded.

The Congressional baseball game last Thursday was a very memorable show of unity and ended up raising a record-setting $1.5 million for charity.