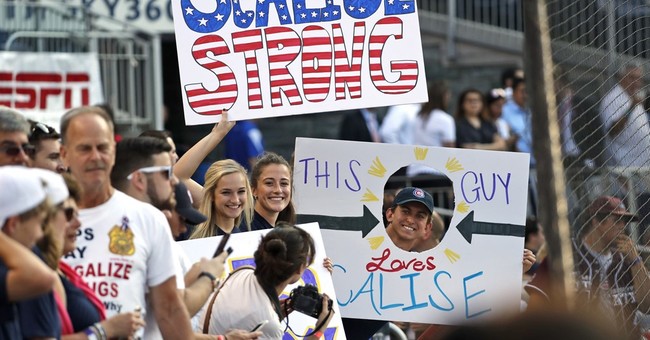 Washington, D.C. - Thursday’s annual congressional baseball competition was much more than a baseball game. It was a much-needed show of solidarity that has become a rare occurrence on Capitol Hill. While last year's attendance peaked at 10,000, on Thursday nearly 25,000 seats were sold and the game raised about $1 million for local charities.

Rep. Steve Scalise (R-LA) was shot in the hip Wednesday at a congressional baseball practice in Alexandria, VA. He is currently in critical condition, but improving. Lobbyist Matt Mika remains in serious condition. U.S. Capitol Police officers Agent David Bailey and Crystal Griner were both injured in the attack, as was congressional staffer Zach Barth, who works under Rep. Roger Williams.

Here were the five best moments (in my opinion) from last night’s game.

During the ball game, Ryan and Pelosi even did their first ever joint interview, telling CNN’s Jake Tapper that they are all fighting for the same person.

4. Notes for the injured

While in line to get into the baseball stadium, my coworkers and I noticed a poster on the ground. It was a message for Wednesday’s injured. Several people stooped and kneeled down to write well wishes to the wounded. A beautiful sight.

Each member of Congress was introduced Thursday night, garnering hoots and hollers from the crowd as they cheered on their favorite players. When it came time to introduce Rep. Scalise and his face flashed on the jumbotron, the stadium went nuts. Everyone – Republican, Democrat – was on their feet, paying their respects to the man who is still fighting for his life in MedStar Washington Medical Center.

2. A bipartisan prayer in center field.

Before the first pitch, both teams came together on second base to pray for their colleague. It was the second time members of Congress have been pictured praying for one another.

By far the most emotional moment of the night was when Agent David Bailey took the mound to throw out the first pitch. The U.S. Capitol Police officer, who jumped into the line of fire Wednesday to save our elected representatives, walked onto the field in crutches. As soon as the crowd saw him and realized who he was, the stadium erupted in applause.

It was a truly remarkable moment honoring a true American hero.

Townhall’s thoughts and prayers are with Rep. Scalise, Matt Mika, Zach Barth, and Agents Bailey and Griner as they continue to heal.

Update: The total is in, and Thursday's game raked in an incredible $1.5 million for charity.